One of my (late to the game) New Year's resolutions is to do a better job at discussing who my sponsors are, and why they are meaningful to me on the old blog. I obvi. am very grateful to all the people who support me in this crazy career, but I also want to share the love so others can learn about what all those logos on my jersey really mean.

So, because it's on my mind, and a new sponsor this year, I'm going to start with a little post on Core Power Yoga! 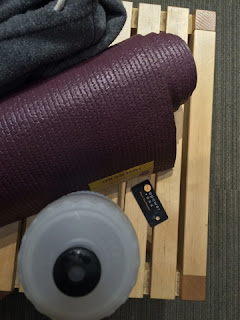 I'm pretty sure everyone and their mother has heard that yoga is great for cyclists. Let's be honest though, I went to my first class mainly because I saw on the internet that Emily Batty does yoga, and Emily Batty is crazy fast so I thought... hmmm, I will do that too!

So in Sept of 2014 Brendan and I went to a yoga class at Core Power in Tustin. It was a little hippy dippy, I have to admit, but holy cow was I blown away by how good (and sweaty) I felt when we walked out the door at the end of the hour long class. Also, again to be completely honest, I may have enjoyed the 'hands on adjustments' a little too much :) So I went back, and then I went back again.

My desire to continue was spurred by a few things;
1) I liked those mini massage/hands on adjustments, A LOT.
2) There's something about slowing down and focusing on your breath and where your body is in space that really felt meaningful to me.
3) Getting totally sweaty while stretching it out is my jam. The heat of the room makes you more limber than normal and I could feel all those hours of leaning over a bike being balanced out.

So yoga has been a pretty big part of my off season since that first class, and I get it in a few times a week during the season when I have time as well. I honestly believe that adding yoga to my training is one of the handful of things I did that made me fast last year (I cringed writing that because I'm incredibly paranoid about jinxing my future race results... but there I said it, I was kinda fast last year).

Core Power is a great studio because coach lets me replace a core workout with a yoga class (they are pretty heavy on the core part of the strength stuff at CPY... as you can probably tell from the name) and because they are ALL OVER so I can drop in for a class when I'm on the road and feel at home for that hour. Every class I've been to has been awesome, they offer a range of classes of different difficulty levels and heats, and I can still get as much out of the intro level class (C1) as any other because it's great for just stretching my tired body out on a rest day after a hard workout. I could go on and on about how great CPY is... but I'm just going to keep it short and sweet and say that if you live near a studio it's worth checking out! And the best part is that your first week is FREE, so if you've never been there GO GET YOUR FREE YOGA ON!

So Thanks Core Power Yoga, for supporting me in my quest to get really really ridiculously fast and win bike races and stuff!