Realness Part 2 (not the post I was expecting to write)

So on Thursday when I blogged about feeling kinda beat down part of what I was referring to was physical exhaustion, but there has been a bit of mental/psychological exhaustion/frustration around these parts as well.

Some of the frustration was stemming from the anticipation of the announcement of the XC Olympic team long list on Friday. Early in the week I became aware that the list would be released on Friday, but after a text message convo with the team director I was pretty sure I wasn't going to be on the list. The timing is kinda sucky because I have so little experience racing at the elite level compared to my peers, and being sick all summer means my World Cup results weren't as good as I had hoped they would be. If the Olympics where 2 years from now I would have the perfect amount of time to get experience and results and I would feel a lot more worthy of being on the list. The frustration is part of what caused the Tuesday night crying in bed sesh... pathetic, I know.

So I spent Wednesday and Thursday coming to grips with the idea of not being on the list, and by Friday I had forgotten all about it.

Then I get a text from Adam as I'm leaving yoga (maybe one of the most peaceful, grounding yoga classes I've experienced) "You're such a f****** stud. Congrats on making the long team!!" My immediate reaction is to think he's messing with me, but Twitter confirms that yes, my name is on the long team list!
Ensue mini freak out, dancing alone in the locker room of Core Power Yoga, and then a quick pedal to Brendan's work where I wanted to shout the news at every car that passed me. Have I mentioned before that being able to deal with the highs and lows of this sport might be as important as a training plan? I'm not sure I will ever be able to learn to be level headed when amazing news or devastating news comes my way but what a weird/great way to end a pretty tough week.

All my previous doubts and concerns still stand, but that little piece of news could not have come with better timing. I am so motivated to train my guts out, never miss a core workout and do whatever I can to ensure that I perform to my full potential this year. And on top of that, all the encouragement and support I have received from friends, neighbors, students and randos about the news has meant the world to me. Thanks everyone for following my bike racing exploits, and for being so dang encouraging and uplifting :) I'll do my best to make you all proud this year and I guess the glimmer of hope I could go to Rio is a little bit bigger now than ever before!

Oh and then on Sunday I crashed on the least technical trail ever... I guess my ego needed to be taken down a notch! And yes that is my blood on the ground :) 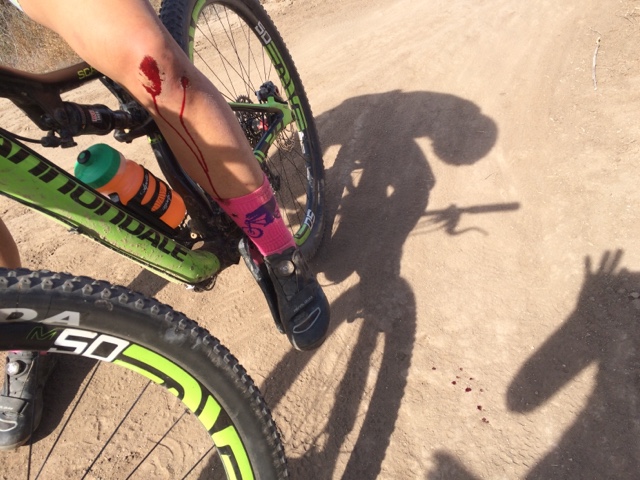