Push-A-Kona is one of my favorite days of the year (or two days that one time!). For those who aren't familiar with the ride, it's a big fun group ride put on by local all around awesome (and super strong) guy Darin. The route is usually about 30-40 miles, anywhere from 8-13,000 ft of ascent, and involves the best Santa Ana trails. Usually about 30 people come out to participate, and most are riding the trails for their first time. If you're a roadie maybe you are thinking 40 miles sounds like small beans, but these are the 40 hardest miles you will ride, with some super steep, technical climbing and very technical descents. I love the event so much because Carl and I ride in the Santa Ana's A LOT but usually we don't see anyone else out there. Bombing down an incredible descent and coming across so many cool people, or running into friendly faces at rest stops is pretty special to me. Sharing this amazing network of trails, seeing all the smiles, and hearing everyone's stories about their ride is really freaking cool. 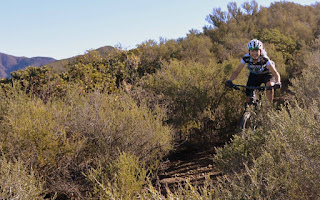 This year the route was to ascend Trabuco trail, go down Los Pinos, up San Juan trail, and down Yeager Mesa. Because we wanted to see people more than once, and because we may have a mental disorder, Carl and I decided to modify a bit by heading up West Horsethief, down Pinos, up San Juan, down Yeager Mesa, up Trabuco and down Bell Ridge. This would also extend the ride time for us to more closely match the group so we could end and hang out with everyone afterwards. We ended the day with 50 miles, just short of 13k ascent.

The recap: We started at 7am, and it was freakin' cold for SoCal, think mid 40's. The climb up West was nicer than I remembered and Carl was taking shots with some rad dudes at Pinos peak in no time. On the descent we caught Darin which was super cool, and passed about 15 others. I got to ride the Felt Decree again (a bike that Brendan designed) and was freaking out about how awesome it was the whole way down. The best part was cleanly riding some really techy loose rock problems, and tight crazy switchbacks that I usually have to walk or dab through. That bike is so capable and fun in the Pinos chunk!

At the bottom we hung out for a bit with a huge group of riders at the first aid station. Carl took more shots while I told everyone who would listen about the Decree (I have a mad crush on that bike) and ate a GU. The cool thing about that bike is that as well as it descends, it climbs just as well, so I couldn't not push the pace when we headed up San Juan. It also helped that I was smart and took it easy up to that point, it may have taken 2 months, but I finally remembered how to pace myself on long rides. 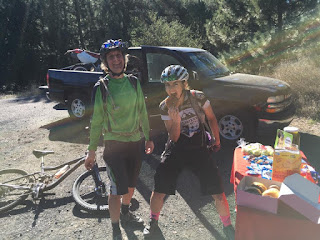 At the top of San Juan we ran into more rad folks, ate a waffle, soaked up the gorgeous scenery, and headed off for the second aid station and 'the wall'.  One of my favorite things about Orange County is how pretty the Santa Ana's are in winter, when the sun is low all day, and light filters through the trees in a magical way. At the second rest stop Pat lubed my chain while Carl and I split the fluffiest, most delicious donut known to man. It was unbelievably good :) The donuts are another reason I love this ride so much! After we fueled up, we cruised up the wall and headed towards Yeager.
The descent down Yeager Mesa drops you down 2,000 ft in about 10 minutes and it was absolutely the best ten minutes of my life. The dirt was perfect, the Decree handled the crazy steep trail like a boss, and I rode the whole thing (minus where the bridge used to be) without putting a foot out, which is VERY rare for me. At the bottom I almost cried tears of joy. We don't have a lot of real dirt, big trees, no rocks descents in SoCal, so this trail is super special.

Then we climbed Trabuco (again I couldn't help pushing the pace because DECREE!!! after 5.5 hours HOW ARE YOU STILL SO FUN!?!) and then I was a total boob and bombed Bell Ridge without waiting for Carl. Sometimes in a long ride with social stops I start to get impatient at the end and want to just shred without stopping. Also it's the Decree's fault, that and the hero conditions, and I knew if I rode like a banshee I would take the Bell QOM from myself, which I did. Descending Bell in well under 40 minutes, which is the third fastest time overall, men or women :)
After the ride I had a quick hose and dawn dish soap bath (poison oak paranoia), some amazing taco soup and got to hear some stories from other riders as they cruised in. I didn't get to see Darin finish because there was a nutella star at home that needed to be baked (yes, it is as amazing as it sounds), but caught up with the man himself at a Christmas party later in the evening.


I know I've been saying this a lot lately, but I am once again at a loss for words regarding the kindness and generosity of the mountain biking community here in SoCal. Thanks to everyone who shared kind and encouraging words throughout the day yesterday, thanks for supporting my World Cup journey and thanks for generally just being so dang awesome. I am very lucky to know all of you and to get to ride bikes with you! I don't really feel like saying thank you is enough, but I promise I will tear my legs off this year and I will make you proud! 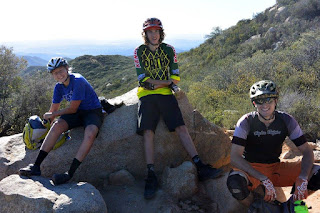