Mt San Jacinto with Taryn-dactyl: Peak 4 out of 6

On Saturday Brendan and I got a special treat, Taryn was in town from Salt Lake and spent the whole day with us! Like the questionably good friend I am, I drug both of them out of bed at 5:30am to drive out to Idyllwild and hike for 5 hours. I have been slowly chipping away at the list of the 6 best peaks to hike in SoCal in an effort to see new places/do something off the bike, and this one was the 4th in a list of 6 recommended by this dude. 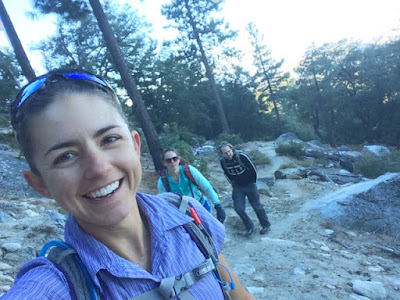 The hike started out pleasantly cool, and we quickly ran into snow, which started as spotty, side of the trail type snow and became cover the entire ground snow by halfway up to the peak. Although I was in tennis shoes it was never too serious of a problem, but there were some slippery, icy situations which slowed us down quite a bit.

We had such a great time catching up, peeing every ten minutes and enjoying the scenery that the first 3 miles flew by. There were quite a few other hikers out, including the obligatory SoCal 'I play my dub step for all the hear' dude who we kindly asked to not share his music with the entire mountain side!
The second half of the ascent was punctuated by large chunks of ice falling from the trees around us as it was sunny enough to melt the snow turned ice clinging to the tops of all the trees. this was a little scary, but thankfully no one got hit! The ground alternated between fluffy soft snow, chunks of ice the size I like in my soda, big old chunks that were awkward to hike through and solid slipper ice. The contrast between the white ground, and green trees/vibrantly blue sky was pretty incredible, I think our timing with the weather was pretty darn good/lucky!

The summit was PACKED which was understandable as it was such a nice day. We ate our Nutella and banana sandos, and hurried back down because we had to be back in Orange County by 4pm. I kinda wish I had tried to identify the other SoCal peaks from the top since San Jacinto has one of the best views of the different mountains around.  And then we booked it for home. This hike felt a lot easier than any of the previous ones. I suspect that going Brendan pace for the first 3 miles on the way up as well as the fact that the whole thing was 13 miles are the reason I wasn't sore or tired at the end. Usually the insides of my hips get really angry on these hikes, but maybe I'm adapting... one can only hope. The great thing about hiking for cyclists is that you use a bunch of muscles and tendons that are normally neglected. I think balancing out those parts of the body is pretty important. That and the bone strengthening effect of all that impact! 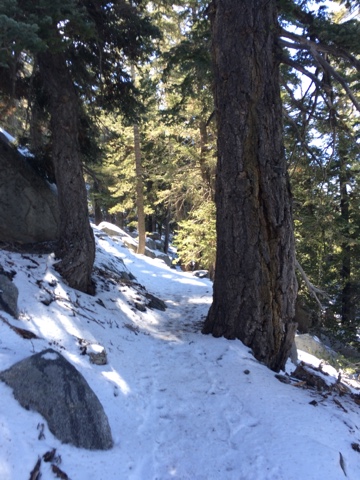 The plan is to hit one of the remaining peaks on Sat, can't remember which one. Then I'll have to squeeze the last one in before it's too wintery and cold! I'll be back to training on my bike starting tomorrow, but the OCD part of me can't handle not getting all 6 + whitney done in one year :)
Posted by Ms Lariss at 10:24 PM