On Tuesday (I'm way behind on here because I played and worked so hard all week!) Jane and I drove up to Newbury Park for the Nocso Memorial Ride. This ride is a fundraising event that supports families who are facing life threatening illnesses in memorandum of Mike Nosco, a pretty rad dude who worked for Amgen and was in the Navy. 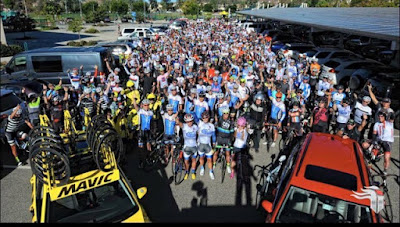 Our day started out with a drive through ALL the freeways in LA because Google Maps wanted to make the trip interesting. We arrived a bit early because Monday night Google told us it could take 2 hours OR 4 hours if we left at 6am... ah LA traffic! 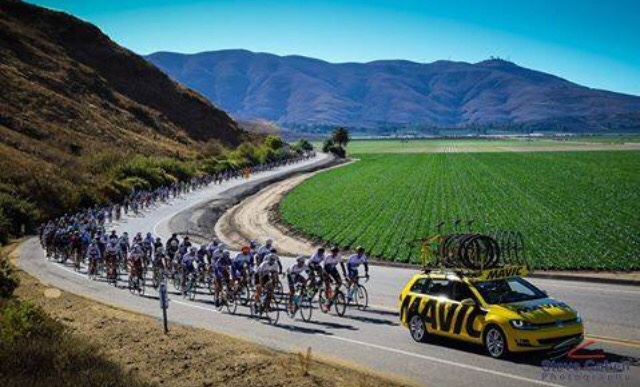 The ride began with a nice 9 mile neutral roll out to the intersection where Mike was hit by a farm truck, and where we had a moment of silence. After that it was a no holds barred charge down HWY 1 towards Deer Creek rd. There were about 150 riders in the pack, including some big time pros so the pace was a little crazy and scary! Somehow I managed to not take anyone out on hwy 1, and attacked the climb up Deer Creek at full speed. I'd never ridden in the area before, so I may have underestimated this climb, and boy did it hurt near the top!

A lot of the reason why I have been doing more roadie group rides lately, besides the cool people on them!, is so I can remember how to ride in a pack, descend fast... all the roadie tricks in preparation of racing a little road next year. I discovered that descending is one of the areas I need to work on when I ran off the road and almost ended up in a fence on a tight left hand turn on the descent after Deer Creek. Leave it to the mtb chick to not know how to ride a bike down hill fast! 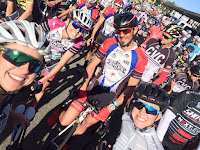 Next was the climb up Mulholland. By now I was in the second-ish main group of dudes, and of course I let my ego get the better of me again, pulling for the first half the climb, and then attacking them. I realize this was just a charity ride, but when the road starts to go up hill somehow the suffering feels so good. Anyway, that one was longer, but more shallow and there was a rad aid station at the top where I had some snacks and waited for the group I had planned to ride with.

The rest of the ride I was a lot less agro and enjoyed the scenery, met new people and had an excellent time. I especially enjoyed riding with CTS coach and athlete Julia. She is pretty hilarious, super strong and I'm stoked I got to meet her on the road!
After the ride we ate some pretty awesome food and then Jane and I had to book it back to OC because I have CPR at 6:30. Overall this ride was an incredible experience, and although it is on a week day (Nov 3 is the day Mike died) I highly recommend taking a sick day to come ride bikes for a good cause with crazy cool roadie peeps.