This past weekend was... interesting. First of all it was super duper hot. That unbearable Oct heat we get every year around now, but always seem to forget about until it sneaks up on us. \

Friday I spent the day subbing 8th grade PE, where the teacher left plans for me to have the kids play Ultimate Football. By 7th period I decided it was cruel and unusual punishment to make the poor things run around on grass in 105f, but don't worry, I was already drenched in sweat by then. 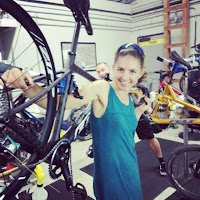 The afternoon was spent at Felt HQ building up the sweetest CX bike (it is so weird to write CX instead of XC...) for Saturday's suffer fest. The bike belongs to Brendan's co-worker and friend Fiona, who might be the nicest person in the world. I'm still a bit confused as to how Fiona is so generous to let me take her beautiful, brand new FRD FX1 on it's inaugural ride, but let me just say, it was amazing! It was also kinda fun to be building/working on bikes with the boy again. Plus I ACTUALLY helped! That picture is proof of me knowing something about building bikes :) 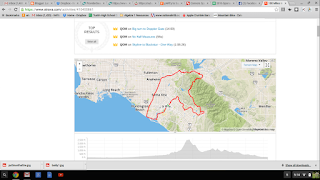 We built up the bike for Saturday's OC GranFondo, a 100 mile shred/suffer fest. When I decided to participate in the festivities I did not realize it would be 100 degrees pretty much all day. Thus at 6am on Sat I woke up, downed some coffee and headed out to get my butt kicked. The GranFondo took us from Irvine to the coast, up the Santa Ana River trail to Corona, and then up Skyline fire road, down Blackstar fire road, and then through the canyons back to Irvine.

The start was fast and fun, and involved a lot of positioning to keep myself close to the front but not too close (I didn't want to be in the wind, there were boys for that!!). At one point some agro dude (who was upset that I was good at holding a wheel or something) called me April like 4 times, not sure what that was about, but let's just say some people take Fondoing a little too seriously. When the 60 mile route split from the 100 mile there were only 6 of us left (I think others did the 100 mile, but they were nowhere in sight), and as soon as we started to climb Skyline the boys all just rode away from me. It was hard to see them go, but I wanted to pace myself a bit as we were only 50 miles into the ride. I had never ridden Skyline before, and thought it was amazing (also I got the QOM, on a cross bike :) so that made me happy). Then the part of the ride which should have been the most fun for me, a mountain biker on a cross bike with disc brakes, was the MOST AWFUL!! I cut/bruised/may have fractured my left middle finger last week, and trying to hold the bars/brake on the bumpy fire road while descending as fast as I could was SOOOO painful!

Eventually my misery came to an end at the bottom of the descent, and I stopped for water at the aid station. This is where I caught my first glimpse of Coke. I told myself that Coke would be my reward if I could survive the next 40 miles of pavement alone. It was already very hot out, and the thought of the super sugary, carbonated cold beverage was like a carrot. So I spent the next 2 hours turning the pedals, counting down the miles, and suffering like a dog.

Surprisingly no one caught me during that 40 mile suffer fest, so I finished in 5th place. Although it wasn't really a race... it was a race. Everything is a race!

So I ride into the finish area and immediately ask for a cold coke. No coke, there is NO COKE!!! Apparently I took too long to finish and the 60 milers drank it all! Well my exhausted, dehydrated, underfed body could not handle this reality and I literally started crying, like fat tears rolling down my cheeks, too choked up to speak crying. I basically couldn't gain control of my emotions, the only thing I could do was put myself in time out, by laying down on the HOT ground by meself to regain my composure. But, as embarrassed as I am to have cried at the lack of soda at a party, I was equally stoked/grateful when the Eric showed up with Cokes from a vending machine around the corner. Thank you thank you thank you Eric!

The rest of the day was spent in a haze of tiredness/dehydration pretending to help Brendan do some tests on bikes back at the old Felt HQ.

Sunday we hit the Solar Decathlon in Irvine, where we pretty much baked ourselves on the blacktop looking at cool Ikea size houses with some sweet green tech built into them. If you're free next weekend you should go, it's pretty interesting stuff and the houses are all really cute. Plus the teams are competing for who has built the most energy efficient house, so next weekend it will be more clear who the winner might be!

The team from Missouri did a particularly good job making a shipping container house. We basically want them to build our dream house one day.


And to cap it off we hit the Silverado Country Fair to see Cubensis play. It was a pretty sweet little weekend, spent with the boy, complete with a mini revelation I'll blog about tomorrow, and a pretty high suffer score.