Weekend Recap: Not Much Going On Around Here...

Things are finally settling down a bit around Silverado. I spent the past week generally just freaking out about if I should or should not be riding my bike. 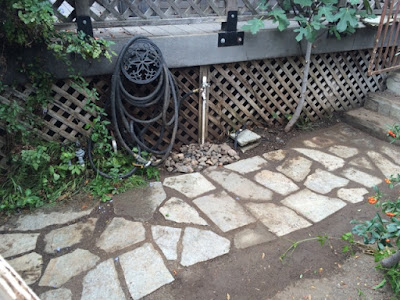 Thankfully yard work is also like exercise, so I was able to focus on that and take a few more days off the bike before starting to ride consistently again. One of the projects that we have been working on FOREVER (and by working on I mean, we started it and kept meaning to get around to finishing it) was setting in the stones for a walkway in the left side of the yard. I was super pumped to finish that walkway on Friday, because now I can move onto more gratifying projects. I also spent a lot of time procrastinating working on that walkway, and realized that yard work is basically doing the same work over and over again... rake the leaves, more leaves fall... sometimes I wonder if it makes me crazy to keep doing the work just to have to do it again in a few months! 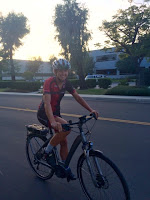 I tried to stay off the bike as much as possible, but on Thursday I snuck in an e-bike commute home with Brendan. It was my first ever e-bike experience and I have to say it was a lot more exciting than I thought it would be! Every time you start moving forward from a red light or what have you it's like the bike boosts you forward, and going 20mph uphill... heck yes please!
One thing we find funny about Orange County is that sometimes they take a perfectly good road and make it non bike compatible. On Brendan's commute there is a long section that used to be fine for bikes and cars to use simultaneously, but they just put in an island in the middle of the road, leaving two lanes that are WAY too narrow for both bikes and cars. I'm not really sure what they were thinking, but now cyclists HAVE to take the WHOLE lane, sorry cars.
Poor Brendan had to eat tofu this weekend because I stopped eating meat a while ago, and I do 90% of the cooking in our house. We actually followed a recipe for this stir fry though and it wasn't too bad for tofu.
And most importantly Brendan went mountain biking with me on Saturday! It may not have ended with a happy Brendan because I may have overestimated his ability a little, and by a little I mean a lot, but it was a mountain bike ride together none the less! We rode in a bunch of places we have never been before, took a super rad, questionably legal gnarly fun descent into the IE and were on our bikes for like 4 hours.

So long story short, not much going on around here. I guess that's a good thing every now and again.
And now I have to go to bed because I'm bike commuting to a sub job tomorrow... just like old times.