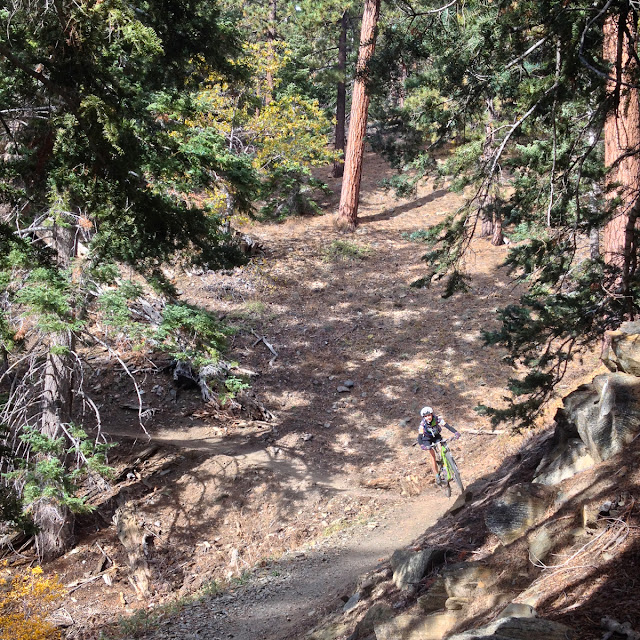 Another Wednesday in October, another mini-epic adventure with Carl, this time in Wrightwood, CA. Until yesterday morning I had no idea this place even existed, and holy moly was it awesome. This time our 6.5 hour 50 mile ride was ~70% incredible singletrack, a little fire road/pavement, and just a few hike through a scree field situations, so much improved from the last Carl tour.

The day started out with a 2k climb from the car in just under 3 miles. At the top I was a little anxious about being able to finish the ride, but when Carl told me how hard he had been going I felt a little better. A lot of the time I confuse the normal pain of riding hard with something being wrong with me and I don't recognize the source of the pain until others acknowledge the fast pace. The climb was followed by a bunch of smooth, flowy singletrack plus about three crazy fun drainage ditch style descents, full of loose switchbacks, perfectly benched in trails and incredible fall colors. We had to stop A LOT to look at the map during the first 20 miles, and got lost a few times, but I finally settled into tour mode and had a lot of time to enjoy the view :) 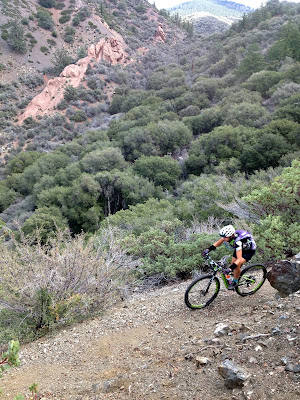 Around mile 25 we hit my favorite trail of the day, Boy Scout trail, which traversed out across the side of a mountain with some jaw dropping views east to the desert. This was followed by 2 more wicked fun descents which took us down to an elevation lower than where we started. I think we hit rock bottom around mile 33, and my legs finally started feeling good just in time for an 'annoyingly long' (Carl's words, I rather enjoyed the grind) climb back up to Boy Scout trail. We stopped for water halfway up at a prison camp, oops, and had a little chat with a nice corrections officer, who helped us fill our bottles NOT in the prison itself :)

Then the best part of the day, heading back on Boy Scout in the DH direction (it's gradual enough that I didn't realize it was uphill on the way out!), following Carl who whips his rear wheel around and hits every wall ride possible, showing me how to descend like a boss. Carl also stopped a bunch to play action photographer extraordinaire, which worked out great when I was lagging from getting distracted by scenery!
And then it was just a matter of 1k more climbing and a sweet narrow little descent (with an awesome rut) to get us back to the car and amazing Mexican food! 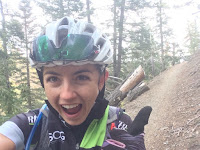 Last time I went on a Weds adventure with Carl I would NOT recommend it to anyone, but this one I would say is a must ride! We were in the middle of nowhere for hours, only saw a handful of other people/about 2 cars, and spent the day surrounded by big trees, rocks and mountains. Even if you only hit some of the trails out there, Wrightwood is an incredibly pretty place with outstanding trails! It's a little elevationy, but well worth the lack of oxygen!