Finally Proud to Live in SoCal

Staring at the map of last week's ride in Wrightwood on Strava the other night I realized something kinda major; Southern California is an amazing place! After spending 6.5 hours riding on middle of nowhere back country trails I was certain Carl and I must have covered significant ground, that there couldn't be much left to ride on the eastern side of Angeles National Forest, and yet we had barely scratched the surface of Angeles National Forest. And not only that, but there was San Bernardino National Forest to the east, and Mt San Jacinto to the south east (which also extends to San Diego), each of which contain miles of excellent mountain biking trails, and hiking. Add to this all the smaller, local parks like Cleveland National Forest, and Laguna/Aliso/ElMorro, where there are tons of trails that freaking rock! AND that's just the stuff I have already explored! To the north we have the Santa Monica mountains which extend all the way into Padres National Forest (basically Santa Barbara!!), where I have yet to ride! Seriously, this place is kinda crazy good if you want to be out in the nature.
>> A map of our Wrightwood ride which barley put a dent in the riding possibilities in Angeles Natl Forest.

BUT IT'S SOCAL!!!! I'm having a hard time wrapping my head around the fact that this place that Brendan and I kinda loved to hate for the first three years we lived here, is actually maybe better than where we came from :) It's paradoxical, Southern California. We think about the cars and the freeways and the bros, but there is so much beyond the smog and traffic.

So, it is my mission this fall to explore every nook and cranny of Southern California, by bike and by foot, to really appreciate this awesome place we live in. It may be stupid hot in October, and I may have to sit in traffic for 3 hours to get to the ride tomorrow, but I'm stoked about the possibilities, and exploring the nearby treasures this place has to offer. 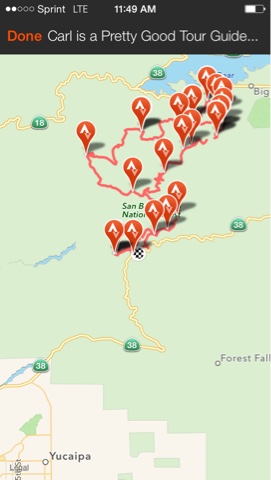 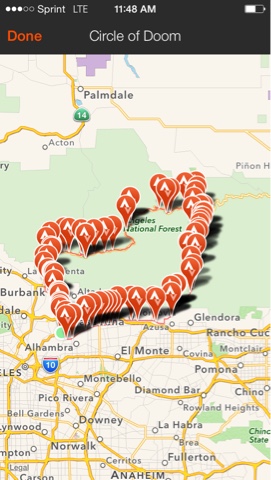 ^^ Two more maps showing how vast the wilderness is here. On the left, a 95 mile road ride with 10K ascent, on the right a 50 mile exploration in Big Bear, again just scratching the surface!