So there isn't much to report about my last race of the season. I was the only one in my class, and thus, I won! I would obviously prefer to have more women in my category/at the race, but I did learn something about bike racing/myself. I learned that although chasing super crazy fast women around like in the world cups is hard, racing by yourself is equally challenging. That may sound silly because all I had to do to 'win' was to finish, however I feel like I should be pushing myself to the limit no matter what the competition is like (including non-existant!), which can be hard when you know in the back of your mind there is no one chasing you. Needless to say, I went hard, tried to mix with the pro men, got my butt kicked, and had a blast! That's pretty much it. Then, today I got some awesomely rad comments on my data from coach about how I actually went harder at Kamikaze Games than at Nats on the same(ish) course, so that was a pretty fun way to end the season :)

Sunday I got to ride with Hubs, which is pretty crazy if you know us, on Rock Creek trail just outside of Mammoth. It was sandy and rocky and super pretty. 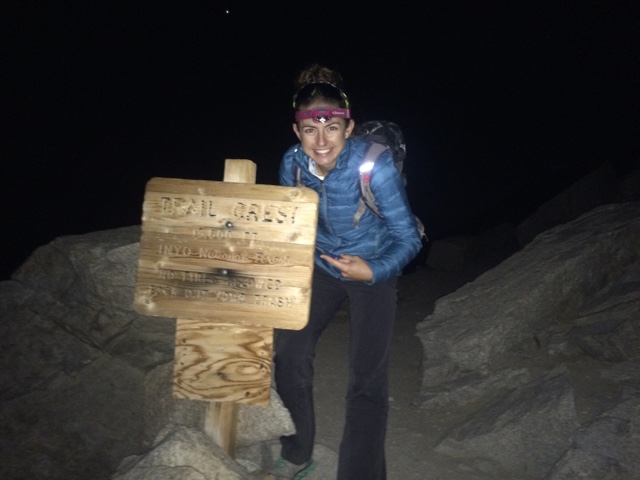 From that point we traversed and climbed a bit more, before realizing, oh crap, we were going to have to hustle to make the top at sunrise. I decided that running at 14,000 ft was a great idea, so I took off and made it with 5 minutes to spare. I found quite a few other people at the summit for the sunrise (which I thought was odd at the end of Sept on a Monday morning...) Anyway, it was cold, but the view and experience were mind blowing! 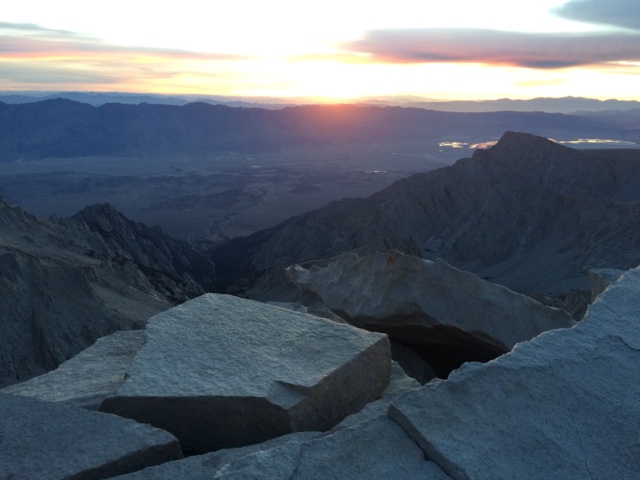 The moon was still up to the west, along with a nice view of some crazy rain storms in the distance. The top of Whitney is just rocks, seriously, rocks on top of rocks next to rocks. It's just a big pile of rocks! 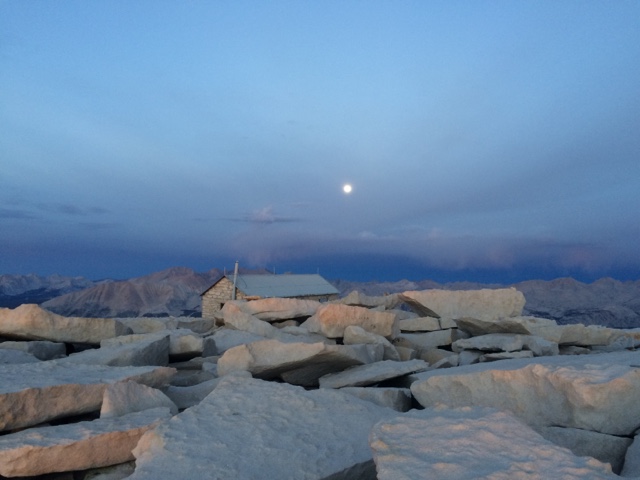 As the sun rose we got to see the first light hit all the peaks and rocks around us, from our vantage point at the highest peak in the contiguous United States... pretty dang cool. 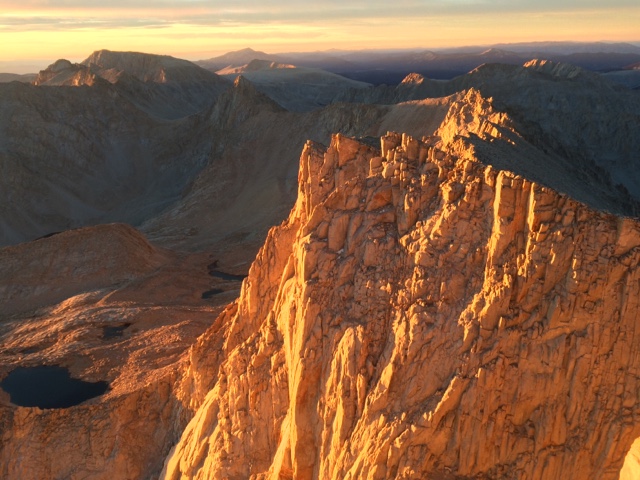 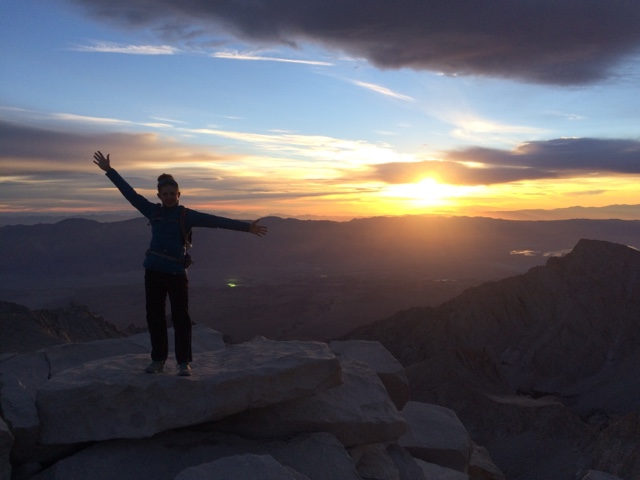 Also, pretty dang COLD! I wanted to go straight down within 10 minutes of the sunrise! The wind picked up and my 3 layers (two running shirts and a down jacket) were suddenly not enough to keep me comfy.

The hike down seemed to take WAY longer than the hike up. For starters it was dark on the way up, so it kinda just went by in a blur. Also we stopped a bunch on the way down to take pictures, pee, eat... where as on the way up we only stopped once. Luckily for us, it was ridiculously pretty on the way down, so at least there was stuff to look at and freak out about.
I had been mildly disappointed at the top about how good I felt, despite the extreme elevation and running, so I also ran the first few miles of the descent. Sadly I have no sense of logic and kinda forgot that the top is only halfway. Maybe 4 miles from the bottom I started to feel the hike, mostly in the soreness in my left hip and ankles. I started to come unglued at the end because it was taking FOREVER to get to the car. The 93 switchbacks, which had gone by so fast on the way up, took SO long to descend, and I didn't remember most of the trail from earlier in the day. All I could think about was a Coke and eating 15 Buffalo (maybe as burgers, maybe whole, all I know is that biking snacks weren't cutting it anymore!) Then with about 2 miles to go I lost it, and just started running again because I could not stand being on my feet anymore, and running seemed to be the quickest way to get off the trail. I just let gravity pull me down the hill, and eventually I saw the store at the trail head, and almost cried with joy/relief.

Our stats for the day included: 9 hours and 26 minutes moving time, 8,479 ft elevation gain, and 22.37 miles covered. I consumed 2 fig bars, 2 packs of Skratch Labs chews, 1 Justin's peanut butter packet, and 1 sample pack of Jelly Bellys, and 2 L of water. We got lucky that there was no weather or snow at the top for this time of year, and discovered that if you want to hike Whitney in the non-peak season you can get a free permit by showing up at the visitors center the day before (if we had gotten them online in advance they would have been something like $32 each). Weirdest part of the hike was carrying my poo bag for 2/3 of the day... lets just say it was very well contained, but knowing it was in my pack was a pretty strange experience. We spotted 1 marmot, and a few chipmunks and birds but there isn't much wildlife going on at 14k.
So now I'm supposed to take some time to rest or something... but I'm already hungry for another epic hike. Maybe Baldy, Gregornio and San Jacinto in one day. Until then, there will be some yard work, substitute orientation, housework... you know, the stuff I've been neglecting all summer :)

Anyone want to make bad decisions and plan a ridiculous hike with me???