Iron Biker Day 3: Put a Fork in Me

I woke up Sunday morning super tired. The wasp stings itched all night and were swollen and tight in the morning. This is what my face looked like... 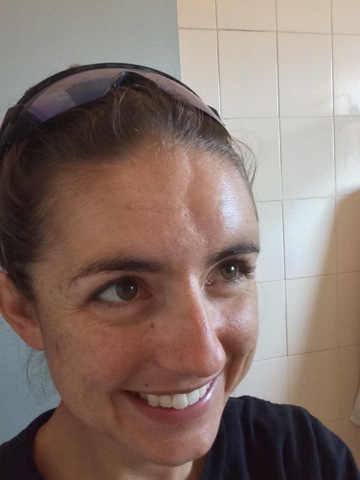 There were also stings on my left arm, both butt cheeks, my right hamstring and my chest.
After an awesome breakfast we headed back to the start line for the third time, too tired to be nervous (did I mention I've never done a race longer than 50 miles before and Sat was 65?!).
The beginning of the last stage was pretty similar to Saturday, we climbed a gigantic hill en mass with all 1,500 participants. I managed to stay in the same group as Angelita until near the end of the first long fire road descent, when I was completely spun out and got gapped off the pack. Then the crazy hike a bikes stated! We had to hike up the super narrow crevasse and dudes were piling in over top of me and pushing me further and further back! At that point I had lost contact with Angelita (again the lead lady) so I decided to ride a little smarter because I was already feeling cracked.
There were a bunch more river crossings, and we passed through some more rad rural towns where the kids rode their old beat up bikes along side us cheering.
About 38k into the 58k race I started to fall apart again, and shifted entiry into survival mode. Then with 15k to go there was a stupid steep climb that never seemed to end! I pretty much lost it here and started bellyaching out loud. Few Brazilians in the race spoke English, but it was kinda cool because we all knew what the others were thinking, resulting in a lot of laughs from my compatriots. One dude even told me I needed to train harder!
Anyway, somewhere in the last 20k two chicks passed me, I tried to stay with them, but it was hopeless. The race passed through a haunted church (I'm pretty sure there was spooky music but maybe that's a figment of my imagination) and then up another crazy steep rocky climb. At the top of this climb I straight up took a beer from a spectator, in an effort to educate them about beer feeds. He wasn't offering the beer, but he laughed that I drank it as I raced.
The last 10k seemed to go on FOREVER, and when I finally saw the finish I thought I might cry.
The finish line was a few k outside of town, and one of my favorite parts of the weekend was rolling back to the square with everyone who finished around me, giving high fives and talking about the race (even though we mostly didn't understand each other). 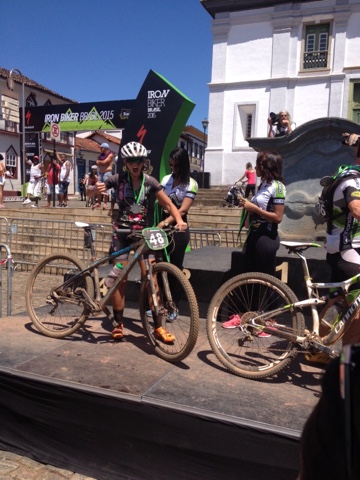 After the finish a very kind older Brazilian man told me (translated by the awesome Fred) that God told him if I come back I will win next year because I brought joy to the race. Maybe the nicest thing anyone has ever told me (aside from Brendan saying I was worth more than his Zipp carbon wheels in college).
Then I proceeded to eat my weight in Acai, which is SUPER good here! 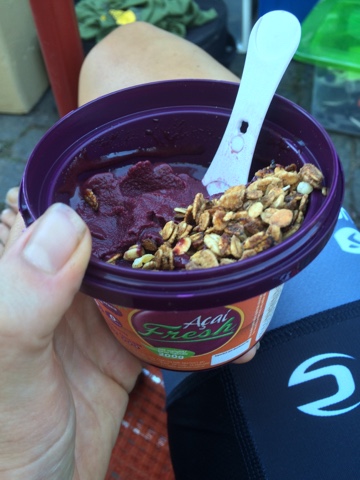 The after party wa a pretty incredible, complete with free beer, live music from an awesome band, and lots more high 5s, which Brazilians take down low followed by a fist bump.
And to wrap it all up, another spectacular podium ceremony (did I mention I finished 3rd overall?) with MORE confetti, a champagne shower thanks to Angelita who is not only stupid fast but an excellent champagne sprayer. 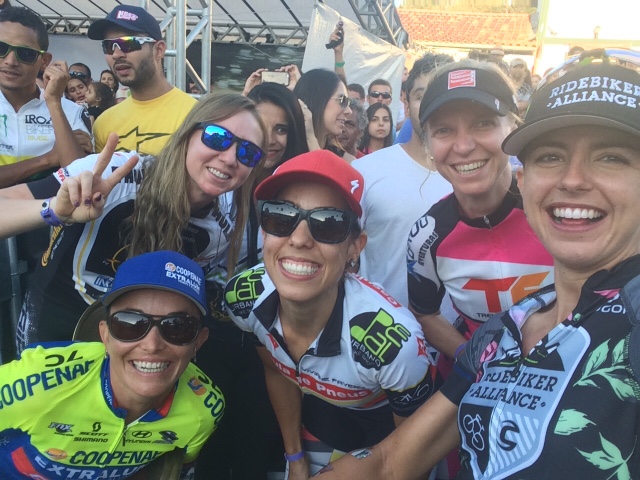 The other awesome women on the podium! 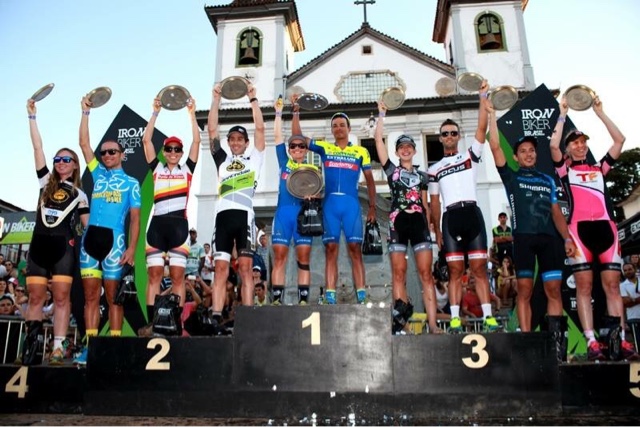 Elite men and women on the podium together. And I even won an award for being the athlete who faces the most hardship/obstacles and still persevered to  finish the race! It's a beautiful Geodesic rock, and maybe the most meaningful thing I've ever won! 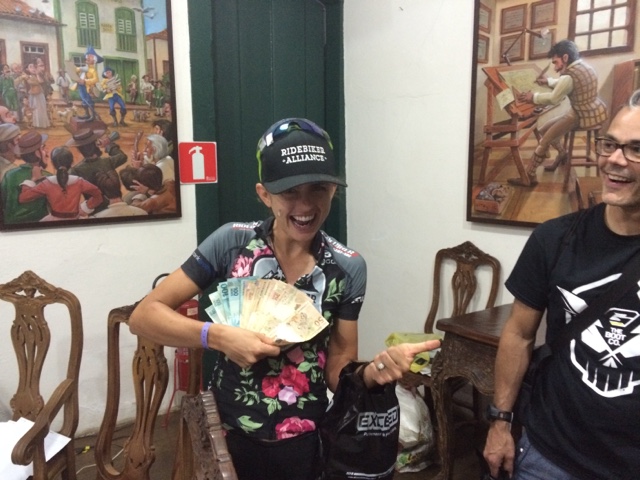 Oh yeah, along with a bunch of BraIlian money!!!
I feel like this is the longest race recap ever and I haven't scratched the surface of how much I loved this race, how agonizing it was, and what a great experience I had racing in a foreign country. There may be more IronBiker Brazil posts in the future, but for now it's time to clean bikes, and do a little more exploring before heading back to the States on Wednesday.
Posted by Ms Lariss at 4:19 AM