On Being Sick, Still, and Trying To Enjoy the Rest of Summer


So I may not remember what healthy feels like... not to be over dramatic, but it's really hard for me to
know when I wake up if I'm healthy or still sick. As a result I pretty much always think, 'Great, I feel ok, I'm going to go do XYZ today" and then around halfway through whatever it is I am doing I hit this wall and go downhill, fast. I did take 4 days off my bike last week, stayed in bed as much as I could tolerate and slept a ton, but still, the illness from hell persists and I am going BACK to the dr tomorrow. (10 days of antibiotics has left me feeling more sick than when I got back from NY, boo). 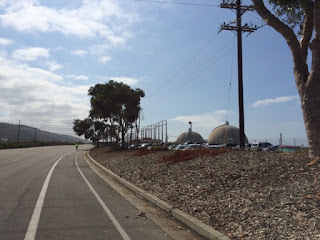 On one hand, it sucks to be sick for so long, but on the other hand, I'm pretty grateful I am still in one piece, that the weather is nice, and that bikes exist. On Tuesday I was car-less, and needed to go to SD to pick up my newly correct passport. Since the route is pretty much flat, and because I am terrible at listening to my body and really thought I was healthy when I woke up, I did the logical thing and rode my bike there! Yep, 78 miles with bronchitis. It was as bad an idea as it sounds. 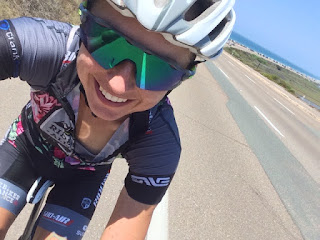 The ride down was punctuated by a sighting of the San O nuclear power plant boobs, 55 miles of road biking bliss along the Pacific Ocean, hitting a Broncial wall at mile 60 and wanting to die, and the most epic quad cramps of my life. There were feelings of sheer joy looking out over the tropical blue ocean, and complete agony as I summoned every ounce of strength I could find to turn the pedals over for the last mile when I was certain each pedal stroke would be the last my quads would tolerate.

But, despite probably making the illness a little worse, I did get to do a little relaxing on the beach with Meryl (the best), took a mellow dip in the perfect water, and snapchatted my sister pictures to make her jealous (she was in school all day). I'm getting serious about getting healthy, I swear, but this partly miserable partly awesome bike ride was a nice summer-y activity to break up all the resting I've been doing!
On an unrelated note, coconut fried shrimp you guys... OMG. We had them in Laguna on the anniversary date, and then HAD to recreate them because that was an incredible dish. We did tacos so it would be more like a meal, and it was just as amazing home made as it was at The Cliff.