Last Sunday I competed in my second ever World Cup race, in Mont Sainte Anne, Canada (near Quebec City). This race was especially important to me because, I knew going into it I would face a large number of challenges, such as extremely difficult terrain, and traveling and racing out of the country. I watched this race last year on Redbulltv.com, and distinctly remember being super impressed with them women for riding the  remarkably difficult rock gardens and gap jumps on the course. I remember thinking that if I ever made it to MSA, I would definately have to take the B-lines in those places because I could never imagine jumping across a river.

During the two days leading up to the race I pre-rode the course and found it to be just as difficult as I had anticipated. The rocks were slippery, the rock gardens steep and terrifying, the gap jump HUGE and the climbs crazy steep. Although I was pretty comfortable with the course by the end of the day Friday, I still had never ridden 2 of the A-lines, one over a steep/slippery/scary rock, and the other the river gap. I never had the courage to hit it without a bridge there because the thought of failing was too strong in my head.

When I woke up in the morning on Sunday I told myself that I could do it, that if I thought I could, then I could, and that I would hit the river gap and the other A-line I had never practiced. Turns out mind over matter really is a thing. 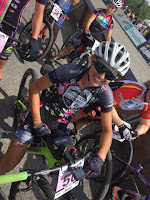 I started the race in the way back, as to be expected when you're #50 out of 60 starters. Still pretty starstruck about the fact that I was lining up behind Yolanda Neff, Maja Wolskskskzskjalska, Irena Kalentieva... you know, the fastest women IN THE WORLD!

The start was fast, but thankfully the start loop involved more fire road and pavement than a normal loop which allowed me to move up a bit. I guess that was everyone else's plan though so I wasn't able to move up as much as I had hoped though. We all ran on the first time up L'Enfer de Sainte Anne (the climb to Beatrice), and then down Beatrice (the most technical rock garden of my life) on the start lap, it was a bit of a shit show. The remaining 5 laps were a hot mess of riding hard on the short climbs, other girls getting in my way on the techy climbing features (usually off their bikes running), me making mistakes on the techy rock descendy stuff/having said girls who I just passed pass me back, and having a freaking BLAST riding the most technical terrain I have ever raced! 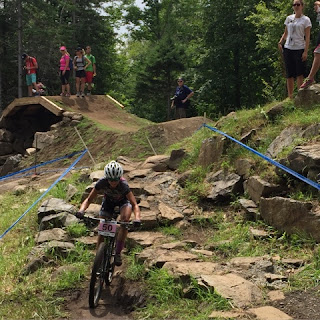 The highlight of the race was hitting all three A-lines including the two I was too afraid to hit in practice. I was especially pumped to clean the river gap 4 times, the first of which I was so surprised I made it that I lost time kinda freaking out that I had just jumped something so big :) The second and third times I hit it I landed hard on my rear wheel and cracked my rim, but fortunately the Kappius rims are so well built that I didn't even flat, and was able to finish the race despite the cracks. The whole race I kept experiencing that feeling that got me into mountain biking in the first place. The feeling you get when you ride something so scary and over your head hard, make it to the bottom alive, and instantly want to ride it again! I live for that feeling :)