Finally Ready to Talk About Windham

It's easy to talk about races that go well, and pretty easy to write about races with crazy unforeseen circumstances like mechanicals and crashes. 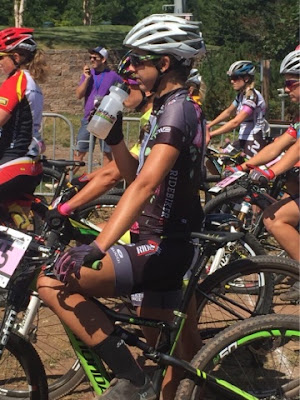 Here is a quick recap of the highlights from my second XCO this year.
The race consisted of 6 laps plus a long start loop. on the start loop there were three crashes which caused major bottle necks, resulting in me being forced off my bike to run it out... I channeled my inner Darin Maxwell and told myself 'every good ride has a hike a bike" right?

Once I made my way around the back of the pack (the crashers and the like) I was able to slowly start moving from somewhere around dead last to just inside the top 30. This took considerable effort, but it felt good to be picking girls off one by one.

Brendan's Aunt and Uncle came and cheered for me. They yelled "Go Connors" among other things, which made me smile. It was pretty darn motivating to know they were on the swoopy banked turn part of the climb each lap, and that I couldn't slack off because they were going to be there cheering :)

Each lap basically took us straight up a hill, and then plunged down through the trees, occasionally crossing the ski slopes, on very dry and dusty trails. There was one notable rock garden on the descent that I wanted to fly through, but on each lap I mentally beat myself up for not going faster through it. Despite my feeling slow through the rocks, I felt really good on the descents. There were tight trees, rocks, roots and off camber turns, all of which I railed as hard as possible. It was freakin fun!

It started to really hurt on lap 4, but I told myself I would get pulled at the end of lap 5 to motivate myself to go as hard as possible since my race may be over soon. 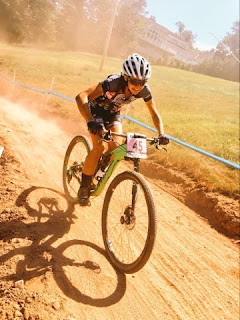 There were only 2 fire road climbing sections which felt like a slog straight up the hill, the rest of the climb was in the forest, or on these weird banked turns. The last fire road section was the worst, but I forced myself to suffer the most on this section. I didn't want to leave anything out there, especially on that climb.

In the end I was 34th, forced to sprint across the line against some Argentinian (or maybe Columbian?) chick. It hurt. Then I got to meet a ton of cool people and go out to lunch with Brendan's Aunt and Uncle, so all in all, it was a good day.

Immediately after lunch we had to pack our bikes and what not for a very early departure. It was bitter sweet boarding the plane to head home. After so many weeks on the road, I am ready to be home for a while, but I enjoyed the crap out of every minute I was out there living the dream. I learned a lot this year, about descending, about racing, about who I am and about how to be a "pro". But I think the biggest lesson I am starting to learn (I won't claim to have finished learning this one) is the importance moderation, which even applied to racing/not racing in the right times. More on this later, but for now I am getting healthy, and staying off my bike till I am feeling 100%.