The summer of racing continues with the two most exciting races of my season, the North American World Cups! First on tap is The XCO in Mont Sainte Anne this weekend, and then we will drive down to Windham NY for the XCO there next weekend.
The team arrived in Quebec City last night to a torrential downpour, but fortunately the rain let up this morning for me to pre-ride the 'XCO track' (that's what the Euros call the XC course).  Originally I wanted to blog about other things, like my time in the mosquito ridden Mid-west, but I have so much to say about the course here, and it's all I can think about!

First off, this is the most technically challenging place I have ever ridden! It took me 2 hours to ride 3 laps, but I think that's because I stopped to session some stuff, and re-ride things I messed up on, like slippery rocks. 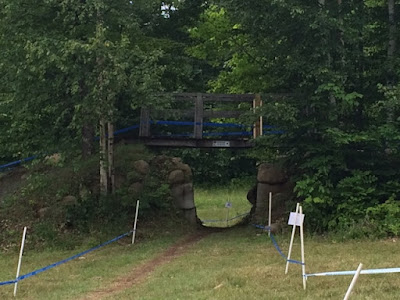 The first half of a lap is relatively mellow, and has some rad bike park sections like a pump track and a swoopy turny part that are SUPER fun. There's also a river gap you have to jump, that part is a little less rideable! Fortunately there was a bridge across the gap today, so I could try and hit it with no consequence. I definitely attempted that feature about 12 times, and am only sure I cleared the gap on three of those attempts (because nice course marshals watched and let me know when I made it all the way across vs when I landed on the bridge).

The second half of the lap is much more difficult. There are multiple SUPER steep climbs with slippery switchbacks where you are barely moving but pushing as hard as you can, a crazy technical rock garden named La Beatrice, and pretty much every descent is littered with drops, slippery roots or technical rocks you have to maneuver around or over. On my first lap I walked LaBeatrice. This is the rock garden I was most anxious about on the track, and it was just as steep, rocky and slippery as I had feared it would be. I overheard a coach telling his rider where the line was though, and the second time through I decided to go for it, and basically screamed the whole way down because I was so scared, and then after I screamed because I was so excited. It was terrifying, but the thrill of surviving the slippery, steep, all rocks at different angles descent was exhilarating, and I basically laughed the rest of the way down the track (which the other course marshals found pretty amusing). On my third lap I decided to hit it again to prove to myself I could ride La Beatrice, that the first time wasn't a fluke, and after a little slip up/running back up the hill I nailed it a second time, again screaming out of fear the whole time. Let's hope I don't scream on Sunday, I'm sure the course marshals, officials, and other riders are wondering how the heck I managed to get enough points to even do this race!
I was pretty stoked on the Scalpel today, because that bike seriously took care of me like no other. I was wishing pretty hard that I had a dropper post, but Scalpy handles rocks and roots like a champ. Even me casing jumps and drops, no biggy for the Scalpel. I was also pleasantly surprised by how well the Kenda Small Block 8 tires gripped the slippery rocks and roots. I never ride in wet conditions, but the tires kept me safe, and the only crash I had was because I wasn't looking where I was going!
Post pre-riding madness (in the beginning I was pretty fearful/not really into riding bikes but at the end I wanted to keep going FOREVER!!!) I washed my bike off with about 100 DH boys. There are cute boys everywhere here... I like this World Cup thing...
Now it's time to lay low and get myself mentally prepared for Sunday. A little more pre-riding is on tap for tomorrow, if I can survive that then I will be on Redbulltv.com come Sunday racing the fastest women IN THE WORLD!!!! Can you tell I'm a little excited!?!?
Posted by Ms Lariss at 3:38 PM