US Cup Finale in the 'Springs!

Under a relentlessly hot sun, on the dry SoCal-esq trails of Pulpit Rock Park in Colorado Springs, we wrapped up the US Cup Series yesterday with one final HC level Cross Country race.
Not racing against the fastest women in the US (and some from other parts of the world) for a few weeks, and having a head cold for three weeks/not doing much in the workout category took it's toll on my confidence, and I went into the race just hoping for a top 10 result. Maybe I'm just a low expectations kind of girl, but I would rather be pleasantly surprised than devastated by a race result. Somehow I was both those things at the same time yesterday. 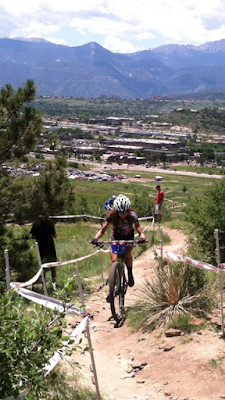 The race started out surprisingly well with little start line nerves and a smooth start loop. We raced 5.5 laps of a course that resembled an infinity sign, which was a bit confusing for me, but kept me entertained with counting how many laps we had left during the race. On the first lap there were some near crashes as girls jockeyed for position, but when everything settled down I was sitting in 5th place in the chase behind Chloe and Erin (the two fastest Americans in the race) with Rose and Georgia right on my wheel. I surprised myself by keeping up on the reasonably technical descents on the first two laps, and felt really good climbing behind Chloe and Erin. We were able to drop Rose and Georgia a little near the middle of the race, so when the pace seemed too easy on the climbs I decided to do some work and came around my chase mates. Turns out there was a headwind on the front of the group (which explains the 'easy' pace) and I am also not as strong as the girls I was riding with. Unfortunately this led to me being dropped on the last lap, and not having the legs to hold off Georgia, who was able to put in an impressive effort on lap 4.5 to catch me. Georgia drafted off me for most of the last lap, and no matter how hard I tried I could not drop her on the climbs. I could hear her breathing pretty hard, but my legs were cramping/I was out of matches. Georgia came around me on the final descent and rode away from me before I could even react, taking the last podium spot.

My first reaction to the race/my result of 6th place in an HC level field was to be ecstatic. I can't help being surprised that I am able to ride with these women who just a year ago were way beyond my ability level. I was pumped that all the training I have been doing for the last two months matched up so well with the specific features of the race (altitude and punchy, short climbs), and impressed with the brilliance of my coach. I was also a little shocked that I had kept up on the descents for the first half of the race, and even Georgia noticed my improved descending!

As time passed though the disappointment set in. Why didn't I fight harder for 5th place? How did I come so close to that podium, but loose it on the LAST DESCENT?! Why couldn't I just be patient and draft during the race instead of going to the front and wasting what precious energy I had (maybe I could have used that effort to keep Georgia away on the last lap!) 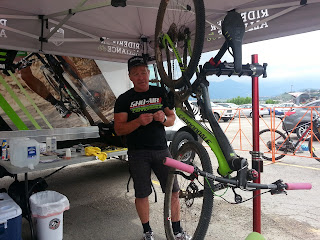 When it comes down to it though, I know the best thing to do is to learn from this experience, and to be grateful for the result and clean race. I feel so honored to be racing neck and neck with Georgia, and to have been able to keep up with Erin and Chloe for most the race. I am also beyond grateful for the level of support Ridebiker Alliance has provided me at this (and all the others) race. To be able to pre-ride both my race bikes and choose the one that feels the fastest, to have Don washing my bikes and throwing an SRM on the Scalpel on Friday afternoon, to be able to focus all my energy on racing and recovering, it's like living the dream I've had for the last two years. And all this support plus the disappointment of coming so close to the podium is the greatest motivation to train harder and race smarter next time.

I don't think racing is in the cards for the next two weekends (until Nationals) so for now I just want to express my gratitude to some of the outstanding people who made my 7th overall US CUP standing possible. Thanks to CTS for providing me with the most kick ass coach. Matt really is brilliant, so much so that I was thinking about how perfectly he prepared me physically while I was racing! Thanks to Kappius Components for hooking me up with super light, super wide rims. I may have fought Brendan on the concept of getting on wider rims, but he was right times 100. These wheels are the main reason my descending has improved so much. Thanks Sugio Apparel for the incredibly cute new kits. I've done a few races in the new kit now, and I am so stoked to wear it every time! And thanks to Adam, Don and Daimo for all your work this weekend washing bikes, handing out water bottles, providing us with a shady place to sit and a wet rag at the finish line. You guys work so freaking hard, for far more hours than us, and you never ask for any credit at all. This is the dream, and it wouldn't be possible without you three. And obviously I am over the moon grateful for the dream bikes I get to race on. Both the Scalpel and Fsi are the kind of bikes I used to salivate over, and now I get to race them. It's seriously a fairy tale :)

One last thought for the day... RIP Alex Meows. 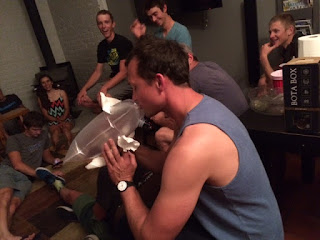