I've been called a few different things during mountain bike races, including a 'school teacher', 'motorboat', and this weekend 'the dark horse'. I wasn't really sure what to think about this most recent label when I came through the finish area on each of the 5 laps we raced on the ski slopes of Marshall Mountain in Missoula Montana. Does it mean I am tan? Strong as a horse? Is it a reference to some obscure movie or something? Whatever it means, racing in Missoula continues to be one of my all time favorite things ever! 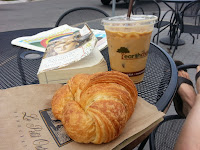 I think this race recap needs to start with my pre-race calorie consumption. If I could pre-game every XC race with a perfectly flaky, soft in the center Le Petit Oture Croissant, I think I might podium every time! Butter and caffeine 3 hours before go time was the best idea ever :)

The Missoula XCT is arguably the best race in the series, because it takes place in the most beautiful place, on incredibly fun trails, and they give you ANTLERS if you finish in the top three. Earlier this week I was told by a few SoCal residents that I couldn't come home unless I brought antlers, so I was fully prepared to go buy a gun and do some hunting after the race, you know, so I wouldn't come home empty handed :) Fortunately, that isn't necessary, because I snagged some the (maybe) easier way, by landing a podium spot! 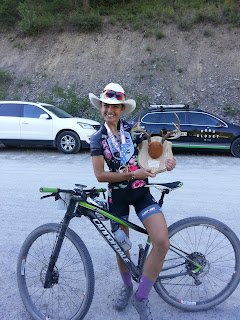 I still wasn't sure what to expect out of my body at the start line of this race because my lungs were still suffering the consequences of that awful cold. When we hit the line though, it was just a matter of focusing on the task at hand, and somehow near the top of the long twisty ski run climb on the first lap, I was sitting behind Leslie Patterson (who was in the lead!). I snuck around her at the top, railed the super fun equally twisty descent, and came into the feed zone/finish area first for lap 1. This freaked me out. I am not the kind of girl who leads races! Did I go out too hard on lap 1? Was I going to blow up later? I sat up a bit and let Leslie catch me, and then rode with her for a second lap. 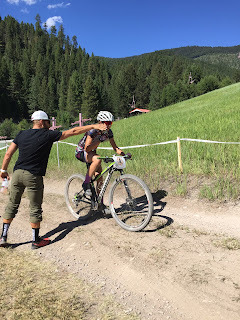 Eventually Leslie's climbing pace was a little too extreme for me (I had more feelings of 'I am definitely going to drop out of this race, I don't feel so good, I am still sick!) so I fell back a bit after lap 2 to ride with Rose Grant, who did a much better job of pacing me for the remaining three laps. Rose out-descended me on the final lap, thus putting me across the line in 3rd, the last spot to earn antlers! I guess I have a problem with going out too hard, and also thinking I want to drop out of every race because that has been the theme of the past 3 races, but maybe it's just that I can't tell the difference between 'your going really fast' pain and 'I hate my life why do I suck so much' pain. Despite the agony, I couldn't be happier with the results of the Missoula XCT. Listening to coach and not overdoing it while I was sick paid off, and now I'm super pumped to race in CO Springs in a week!
Post race I made some bad decisions, and had to quickly figure out transportation plans for the remainder of the week without internet, but the evening ended with Cardamom ice cream, so you know it was a good day! 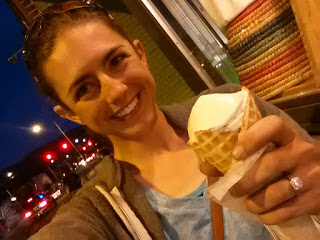 Now I'm road tripping the crap out of the Northwest, solo, sleeping in cars, riding bikes, and living the life! See everyone in CO in a week!!