Well this one fire road I sometimes do my intervals on happens to be the location of a local hill climb time trial, and I love nothing more than going up hill for an hour, so doing this race was a no-brainer!

When I arrived at the race I set out to be successful by doing my warm up, and then rolled to the start where I promptly waited in line for my turn to go, for 30 min... yeah, more good preparation. Then when it was my turn, and I went off the line WAY too hard. This is where my poor decisions stop though (well, almost). Thankfully coach had talked me through the ideal average power a few days before so I promptly pulled on the reins and tried to control myself for the first 30 min. So basically the rest of the race went something like this: drink juice, pass some dude, obsess over power numbers, pass some dude, repeat. It got painful near the middle, but I was passing a lot of dudes at that point, so I had to act like I wasn't trying too hard. Then I got to the small downhill section near the end. At this point I knew the previous course record was well within my grasp, so I was flying, trying to break the record by as much as possible. I passed a dude and a chick, and then WAM! I cooked a loose, slide-y right turn too hot and hit the ground super hard, right in front of said dude and chick. I knew my knees and butt were pretty messed up by the incredible pain they were feeling, but I also knew I could still set the new record if I kept racing so I was back on my bike before anyone else caught up. The nice thing about crashing is that suddenly the agony in your legs from racing is replaced by searing pain in your wounds, which is kinda nice to me, to change the focus of the source of pain. Then basically I tried to see how much I could possibly hurt by sprinting at the finish, and crossed the line in 57:15, not bad for a girl!

The best part of the race, aside from the moment I realized I was going to beat the old record, was being crowned queen of the Santa Ana mountains (a title I secretly coveted all year). I've been collecting all the QOM's in my home mountain range for the past few months, because, well, I ride all these trails and fire roads so often, so it was kinda fun to be given the official title :)

Being crowned Queen with a plastic tiara>> 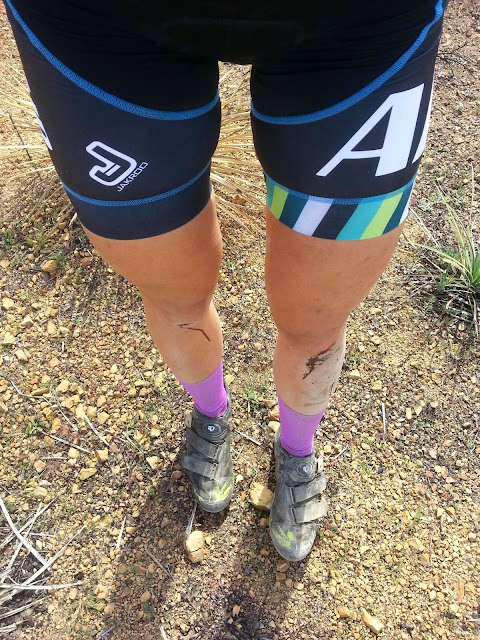 After the race I rode a bit more, but was soon very much aware of how much damage I had done to my legs, there was even blood on my bike... so I called it a day and rode down Motorway.

Despite the terrible ruts and loose rocks and overall horrible condition of the trail, it was kinda pretty seeing all the burned scrub brush at the top, and lots of new green is coming up nicely in the Silverado burn area. 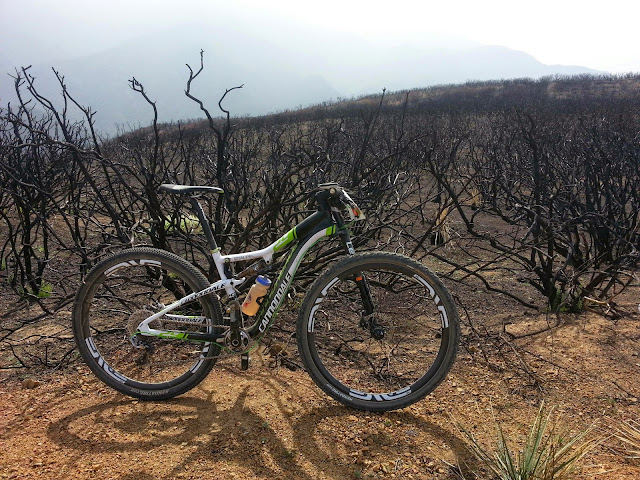 One interesting thing I observed from this race is how much more power the guys have to put out to go just as fast or a little faster than me. I guess being small has it's advantages!
And we capped off the weekend with Nutella/banana filled crepes on Sunday morning :)

So far this year I am three for three, but the race this coming weekend is going to have a formidable opponent, so defending this winning streak might be difficult!