Respect the Wisdom of the Inuit

Here I am on Sunday morning, the last morning of Christmas break, sitting on the couch and not riding my bike. It's the weekend, and we aren't leaving to drive home for a few more hours. The weather is still nice here, and the beautiful Sonoma County roads and trails are all open and probably full of other cyclists, just not me. I'm not injured (well mostly), and my bikes are all in working order. So why am I not out there enjoying every last minute of being in Northern California?
Friends have been trying to warn me about my mildly destructive behavior that led me here, and after last Sunday's 'race' I could tell I was a bit cracked even though break was only half over, but I still couldn't resist the burning desire to ride my bike every minute the sun was up.

This past week started with a nice Steady State workout on Willow Creek Rd, a dirt road that winds up from the coast towards Occidental. The workout was hard, harder than normal because my legs hurt from riding 350 miles the week prior, but after 2 hours of structured workout I met up with Brendan and a friend to ride mountain bikes on some ridiculously fun trails near by. Brendan could be heard screaming with glee on most the descents, it was a great time, although my legs were tanking!
Wednesday I did a mellow ride up HWY 1 to Salt Point State Park for mushroom hunting (a 3 hour stroll through beautiful woods with good friends, during which I spent a copious amount of time on my hands and knees under huckleberry bushes. We gathered a good haul of mushrooms, many of which we still haven't cleaned, and ate delicious fudge thanks to Diane :)
Thursday was race day, recap coming later on that one. I'll just say that Thursday involved both road and mountain bikes, and it was awesome!

Friday, after an incredible breakfast of scones, eggs and lattes courtesy of Phil, we went on one of the most fun mountain bike rides I can remember in China Camp State Park. The trails were either screaming fast, or tight and tree lined to rocky and rooty. The Scalpel and I had a blast trying to keep up with the boys on the descents and crushing souls on the climbs (jk, it just sounds good to say crushing :) haha) 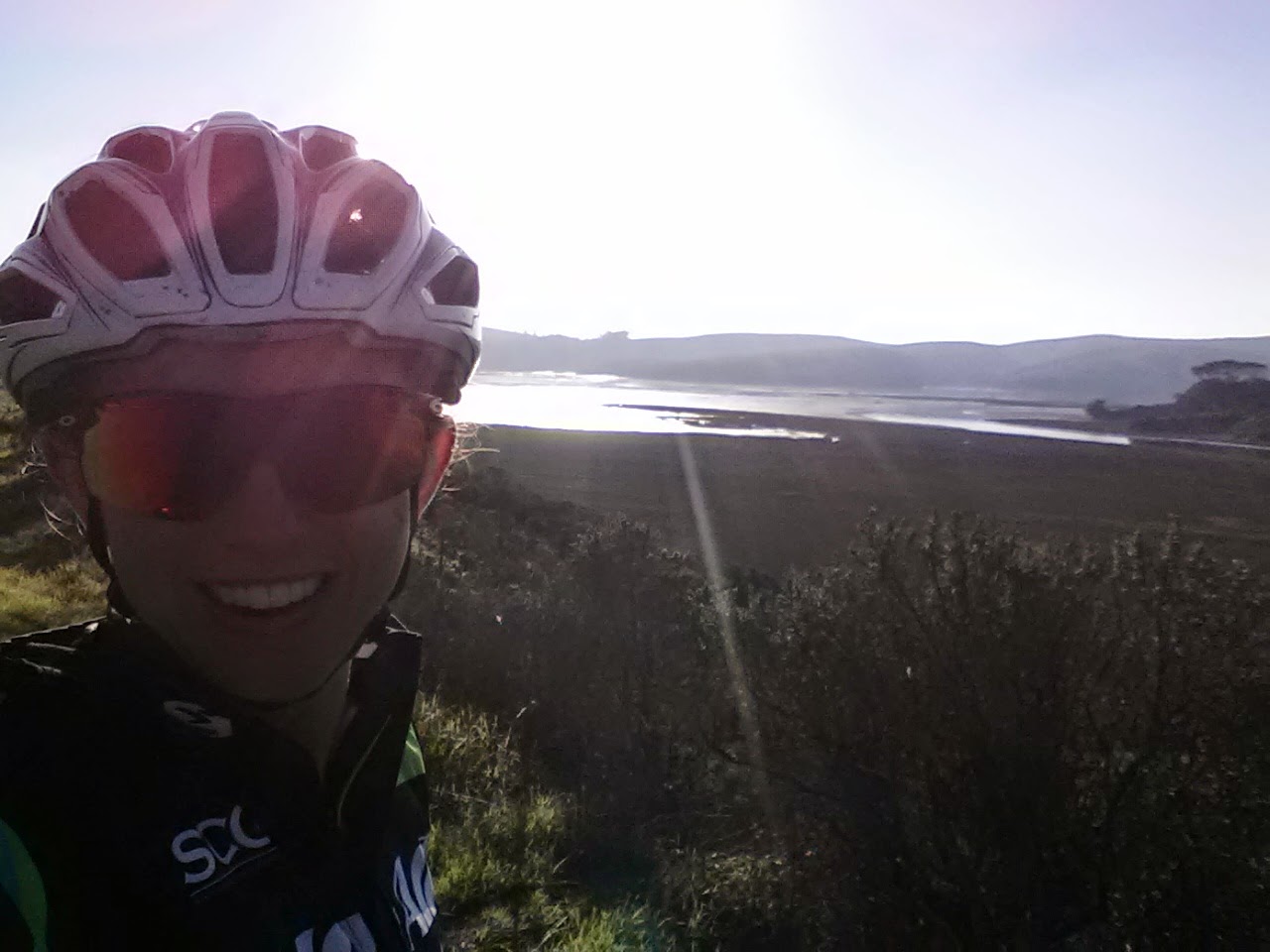 Then I rode my bike from San Rafael to Bodega Bay via Sir Francis Drake Blvd to HWY 1. The scenery was absolutely breathtaking. I've never been on S.F.D. past Fairfax, and I fell in love with all the little towns heading west towards Point Reyes. The road passes through a forest where huge Redwood trees surround you, and then opens up to sweeping views of pasture land and Tomales Bay. Although it took me 3 hours to complete the trip, I almost ran out of daylight and was dead tired at the end, this was my favorite road ride of the two week break.

Saturday I was not quite as excited to hop out of bed and onto my bike, but I woke up fairly early anyway to pedal out to Santa Rosa to meet up with old and new friends for a fun little mountain bike ride in Annadel Start Park. The ride in was rough, needing to be on the east side of Santa Rosa by 10:30 meant I couldn't cruise on the ride out, and it's not exactly flat between Bodega Bay and Annadle. The mountain bike ride that followed was awesome thought (a bit on the rough side for my legs, but still so fun). I got to ride with some super fast local chicas, and even hit the deck super hard on a screaming fast descent. At the end of the ride I was cooked, and didn't have it in me to ride back to Bodega Bay :)

This past week I rode 250 miles, raced my bike, went 3 days in a row riding both road and mountain each day, and spent almost every waking minute Tuesday through Saturday outdoors. Sounds like heaven, and it really was, but I've learned there is such a thing as too much biking, a weird concepts for sure.

I've learned a few important lessons over the past 14 days, but of them the one that is having the biggest impact on my Sunday is that you should always respect the wisdom of the Inuit and 'don't overdo'. I did not respect this precept during break, and maybe rode my bike a little too much. I used to think gluttony was something that only applied to over-eating, but I now know it can come in the form of riding bikes :)
Posted by Ms Lariss at 11:25 AM