That Time we Hiked 18 Miles With no Training

Half Dome Recap...Finally. I thought being sick was going to give me a chance to catch up on life, but really I just swapped being on my bike for being asleep, so no extra time for anything!
We set off for Yosemite Friday afternoon, and arrived at our campsite pretty late. We got super lucky and ended up snagging a campsite in Upper Pines, a short walk from the Half Dome trail head, because someone cancelled WHILE I was on the phone with the parks service, score! As we drove into the valley we watched the temp drop from 60 degrees to somewhere in the 40's, not good news for two kids who live in SoCal. We set up camp in the dark and went to bed, only to be awakened by our hiking buddies who had been gallivanting about, drinking Oprah drinks at the fancy hotel all evening. We were all back in bed by 10, excited for the hike, and pretty darn cold.

In the morning we ate a quick breakfast and were hiking by 8:30, about 2 hours later than I had wanted to get started. Everyone I talked to about this plan leading up to the trip told me it was going to be a long, hard day. They said it would take 12 hours, that my knees would ache at the end, and that none of us would be friends on the way back down the trail at the end of the day. This made me nervous about our late start, but Phil and Danny were confident that we wouldn't have any problems, so no one was in a rush to be up pre-dawn.
Along the way to the top we found a bunch of pretty waterfalls, talked about our pipe dreams of living off the grid or in Sprinter vans, and ate some awesome trail snacks.
There were about a million stairs, and about 2/3 the way up I had painful blisters on my heels, but I was pretty convinced I wouldn't leave without getting to the very top.

When we first came into view of the rock face we had to climb, I had second thoughts tough. It looked WAY steeper than I had imagined, it was really cold, starting to snow, and my fingers were completely numb. The first few prusek (sp?) knots I had to tie were agonizing. My fingers hurt, and the wind was blowing hard, so I was afraid to let go of the big cable I was tying in to. Our technique for getting up the last/steepest section of the climb (the part where there are normally wooden slats that act like stairs) was to wear a climbing harness, and to basically tie the harness to the cables on the rock face, such that even when we were switching from one cable to another we would be tied in and safe. We had to switch cables pretty often at first, which was clumsy with thick rubber gloves and numb fingers. I felt like a wimp, and I wanted to quit about 3 cables in, but I decided to push through the pain, and luckily about halfway up my fingers regained feeling and I started to get the hang of tying in every few hundred feet.
I'm so stoked I stuck with it on the climb up, because the views from the top were incredible, and I felt so bad ass having made it all the way in the wind, and snow flurries, and icy temps. It was also pretty cool to be at the top of Half Dome with no one else there.
The 9 mile hike back down the hill to camp went by in a flash, probably because I spent half the time eating Tsering's amazing trail mix and the other half learning the lyrics to Biggie rap songs from Phil. Despite all the predictions about how much the hike would break us, we all felt really good the whole way back, and made it to camp by dusk, 8.5-9 hours total.

On Sunday morning Brendan made us the most amazing waffles, and we went for a short walk to a waterfall before hitting the road for our long drive home. 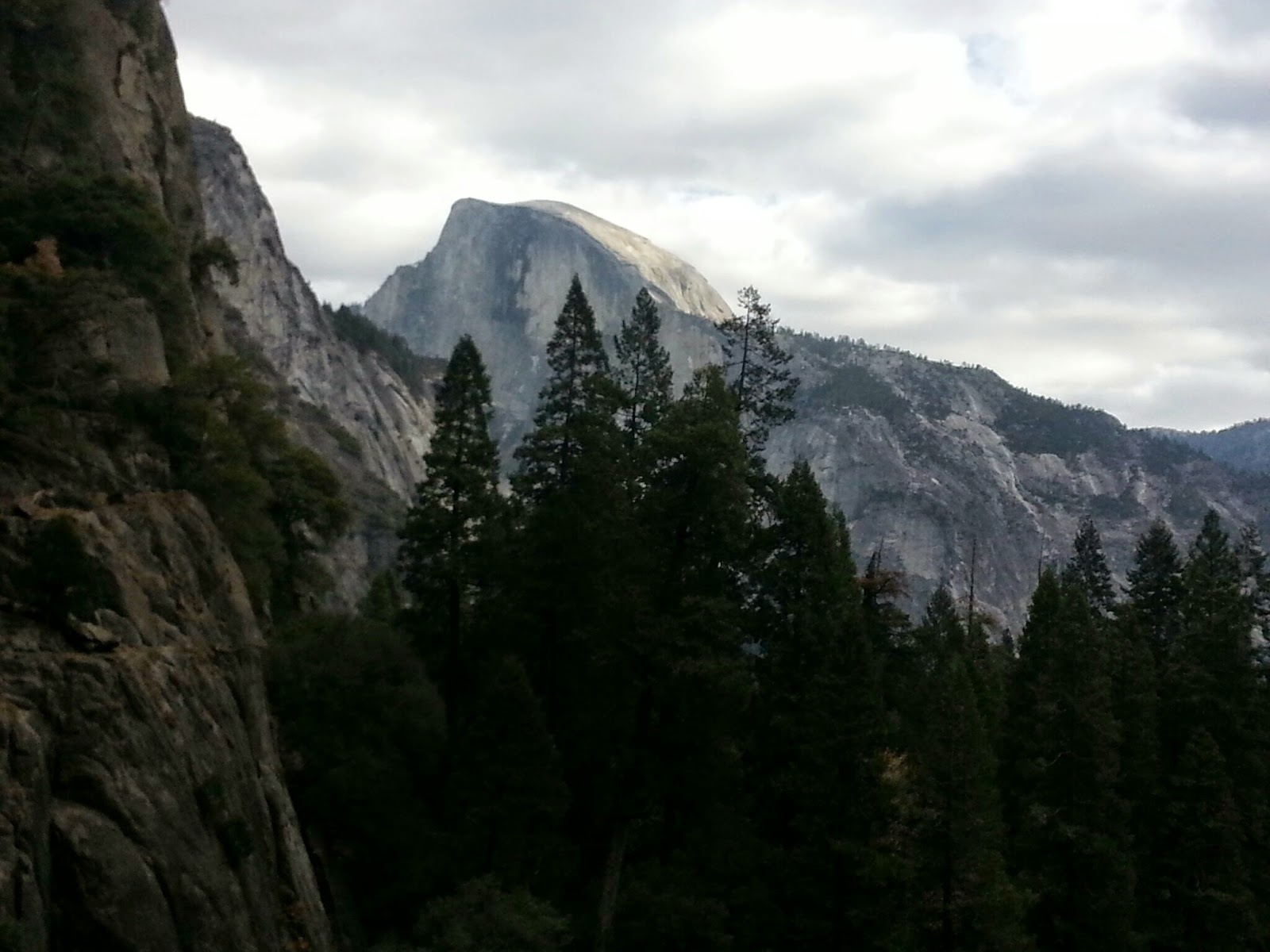 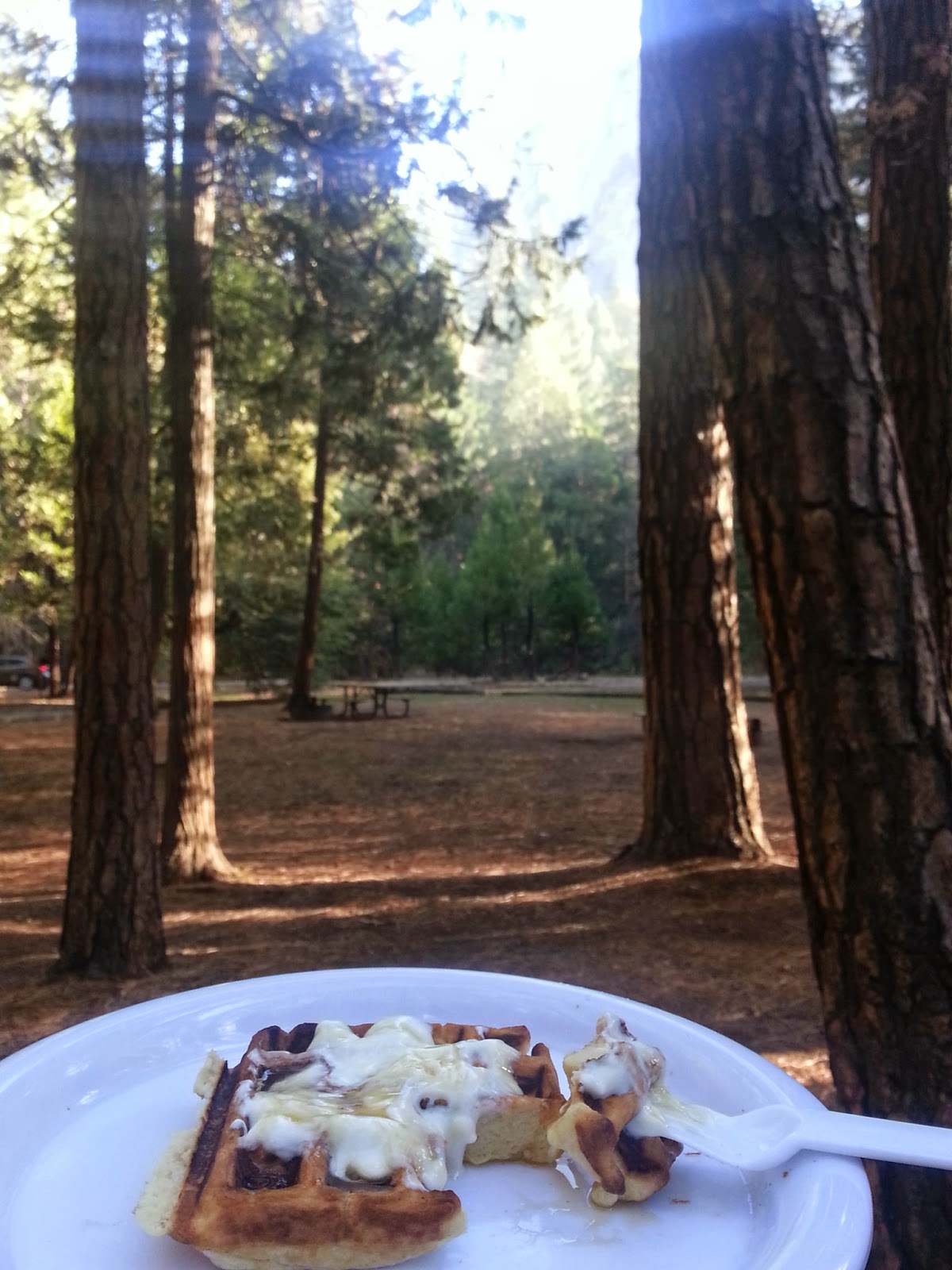 Overall it was an outstanding weekend. I have never been so cold, I have never felt such a sense of accomplishment doing something that wasn't cycling, and I had a great time with some of our bestest friends in a really pretty place! Now I want to do more hiking/climbing adventures!