What, A Race Recap In November?!

Yes, it's true, I raced my bike today. Well, it wasn't really supposed to be a race, but what can you do when a 50 mile dirt fondo starts out with a bunch of dudes tear-assing down some relatively flat, totally tacky dirt roads, besides tear-ass with them?

This story actually starts on Saturday though, because Saturday's ride was noteworthy in itself (and I actually have pics from Sat!). Carl and I took our chances with the rain and low clouds on Sat morning, and headed out into the Santa Ana's at 8am. We climbed Holy Jim in what was probably the most scenic conditions ever. Red and orange leaves on the ground, bright green shrubs everywhere, wet dirt, and beautiful clouds surrounded us. We did get rained on during the climb up Main Divide to the top of Upper HJ, but the view from the top was well worth it. Huge, scary looking clouds were rolling over the range below us, and we could see sunshine down in Riverside County, where we were headed.
Next we hit Coldwater trail, a CB favorite. The dirt was perfect, the views were out of this world good, and the trail was fun, fast and flowy, just like I remembered it. I did crash pretty hard in a switchback and had a huge bump on my right shin the rest of the day, but it was so worth the pain.
Post a quick snack break at the bottom, we took off up Indian Truck Trail (my fave fire road). I was kinda a jerk, and left Carl behind because I wanted the QOM, I obviously didn't really learn my lesson from last weekend. 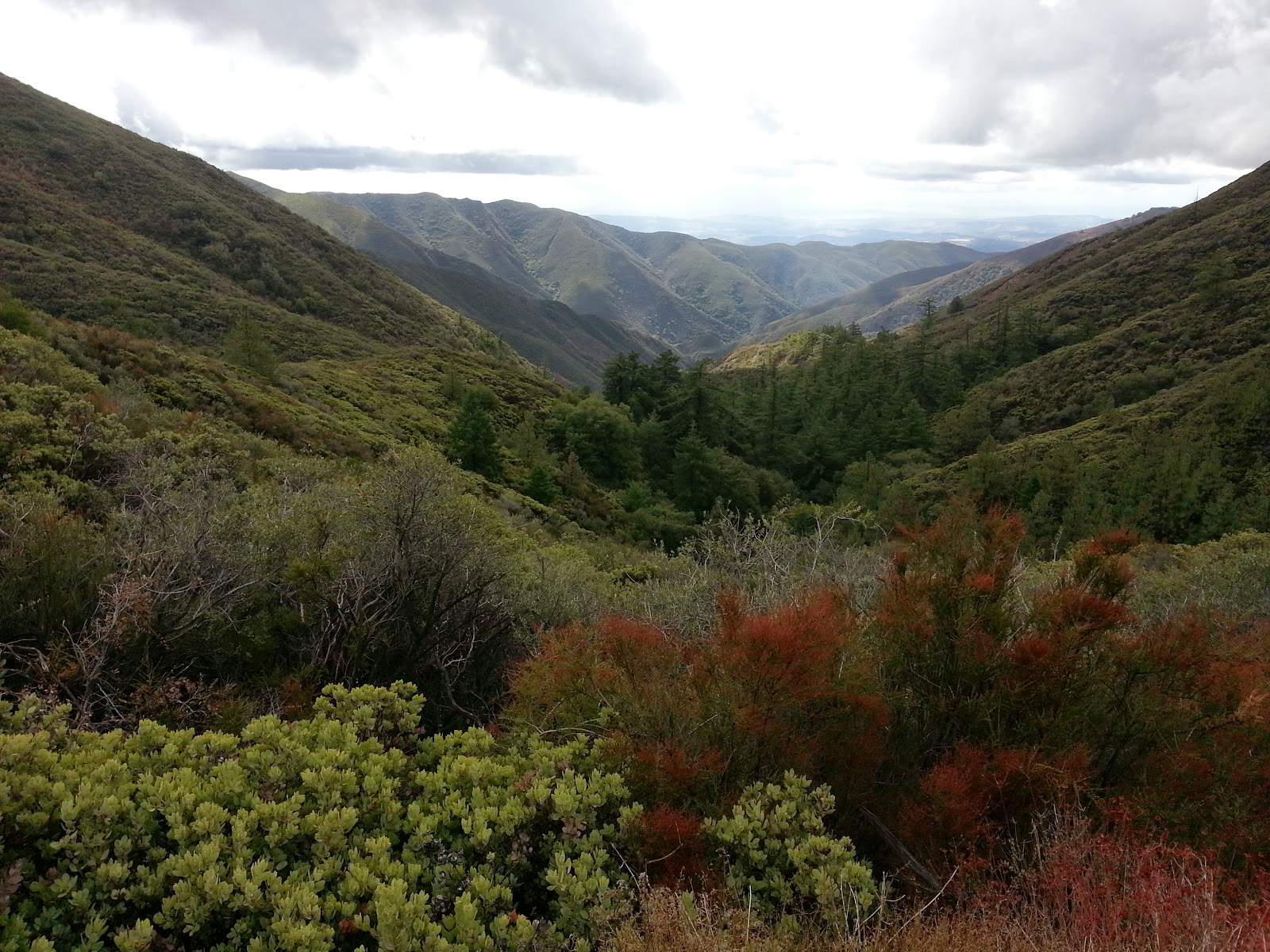 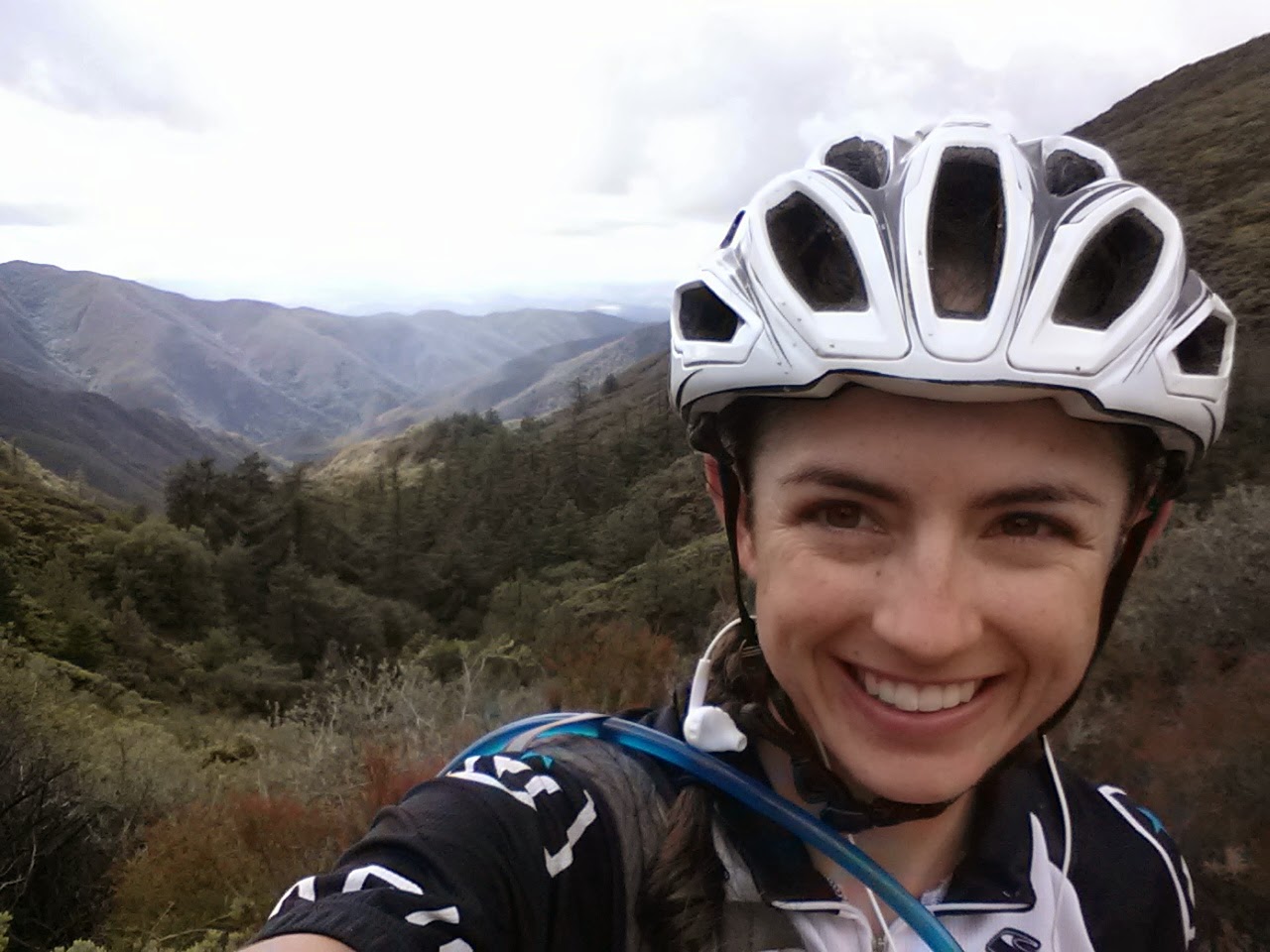 We had a quick debate at the top about which way to go, and decided to can our original Joplin plan to avoid getting rained on, and hit Yeager instead. Things got really interesting on the Yeager descent. It was really slippery from the rain, and I crashed into at least 3 trees, and also smashed my saddle into my torso about a dozen times. This led to me singing Get Dirty on the way down Trabuco trail and the wash.
The sum total damage from Sat was 43 miles, 9,500 feet elevation, and I rode two of the big climbs pretty hard despite my better judgment.
Sunday's ride was 50 miles with 3,500 feet climbing, so much easier from the elevation standpoint, but much much faster. After the super fast start, where I thought I was going to get dropped any second, I settled in at the back of the lead group of about 8. I surprised myself by hanging on to that group for the first 20 miles, a few times I would get gapped off for whatever reason, but I would put my head down and dig for a while, and catch back up. Then a really unfortunate bad line choice caused me to have to to jump off my bike and run for a sec, and I lost contact with the leaders completely. I was alone for the next 7ish miles which really sucked because it was much harder to keep the pace high without a wheel to follow.
Near the turn around (mile 27) there was a series of really tight uphill switchbacks and somehow I caught a few guys there (prob all the switchback practice on HJ on Sat!). I used them to leapfrog up to the next few guys and then the next. Every time I would catch up to two more guys I would rotate with them for a little bit, and then, because they were taking slower and slower pulls, I would accidentally drop them and end up riding away. This happened until I was in 3rd place, alone, with 8 miles to go. I had started the ride thinking I was going to blow myself up because the pace was so high, but apparently everyone else had the same problem, so I managed to cross the line 3rd overall, a minute-ish behind the leaders. It was an epic ride, mostly because I haven't ridden race pace in a while, I've never raced 50 miles before, and I was trying to compete with men. I had a blast carving tacky swoopy trails on the CXR29er, what a fun bike for a dirt road race! It was also awesome because some of my favorite people were there, we drank the most amazing coffee/chocolate beer after the finish, and Allie, Brendan and I FINALLY got to start chipping away at this list of life changing burritos (we had #3).

That's the story of the Filthy Fifty. Now I'm on a rest week, wondering what I'm going to do with all the time I wont be riding my bike! JK, time to do all the chores I've neglected for the past 8 weeks!
Posted by Ms Lariss at 8:36 PM