We made a bit of progress this weekend on the composting toilet/guest room bathroom, and I haven't posted about it in a while, so here is a little update. Among the things we have accomplished lately are:
Putting up drywall
Installing a pocket door
Mudding and sanding the drywall
installing tile floors, grouting them and sealing them
Installing a vent pipe outside for the smells
installing a ceiling fan (for more smells)

Now some pics of how it went down, and my manly man doing things. 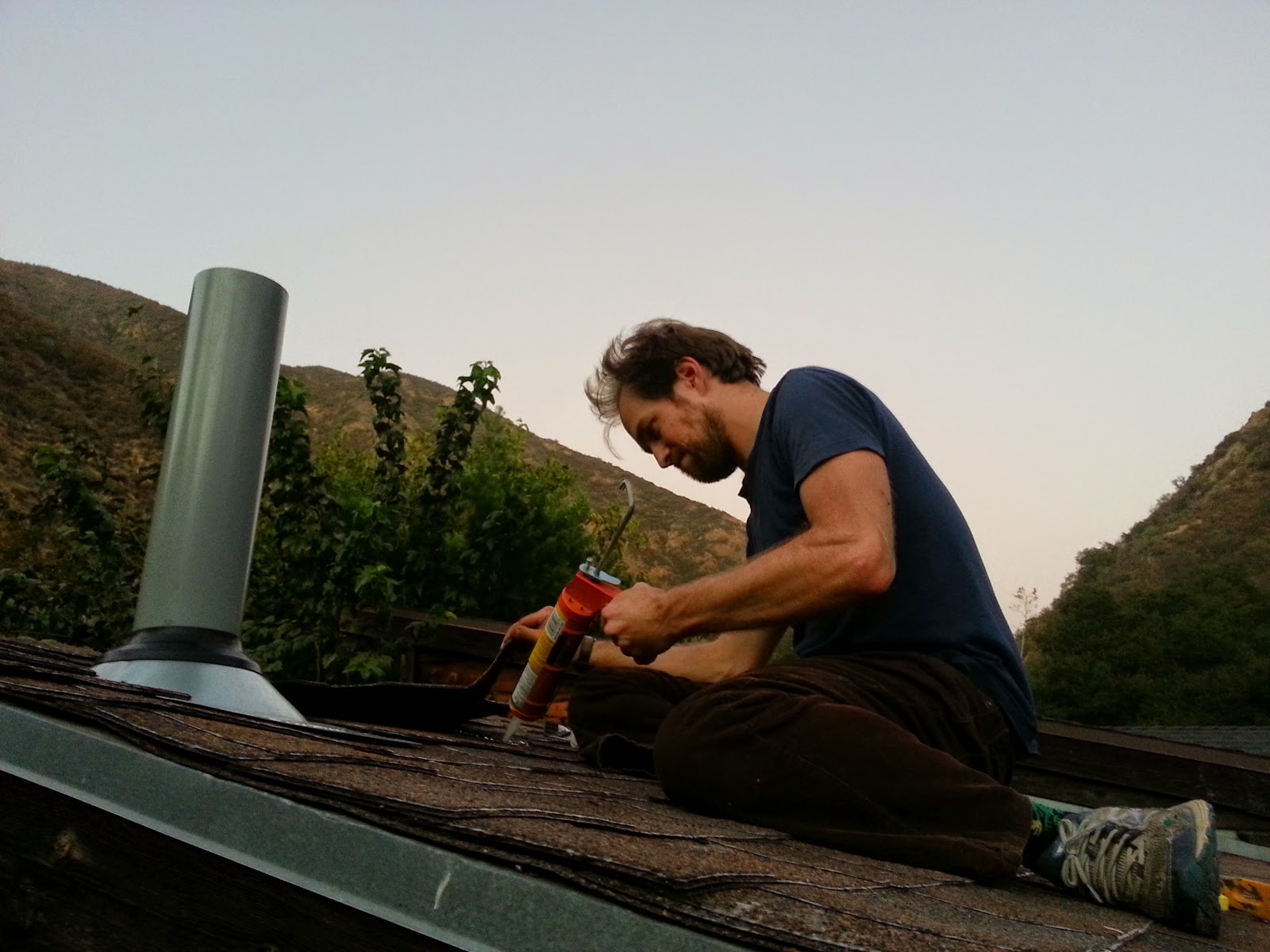 Brendan working the roof. Thankfully the weather has been fall-ish so being on the roof is much more pleasant! That's the vent stack which will keep odors from the composter from bothering us. 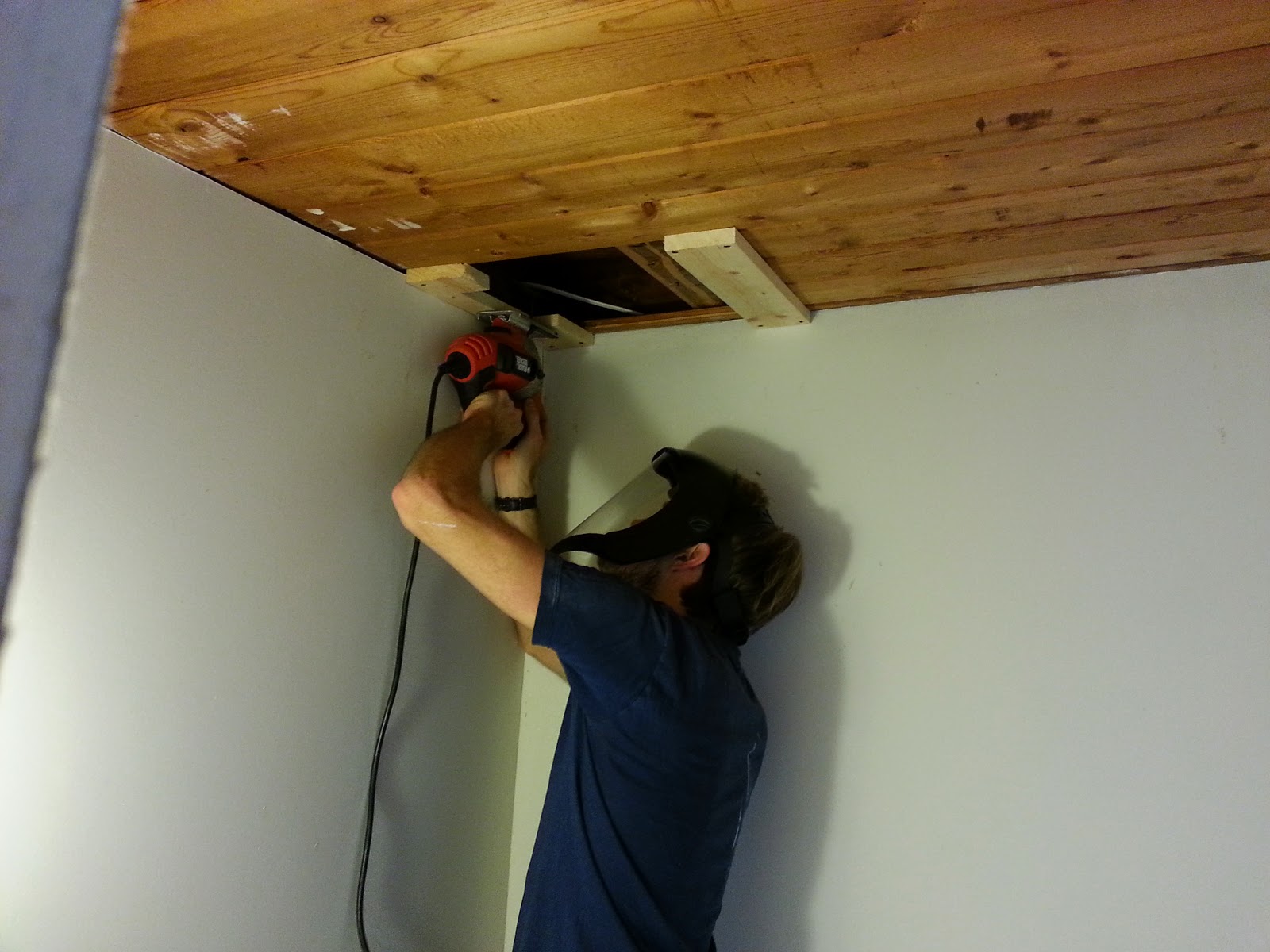 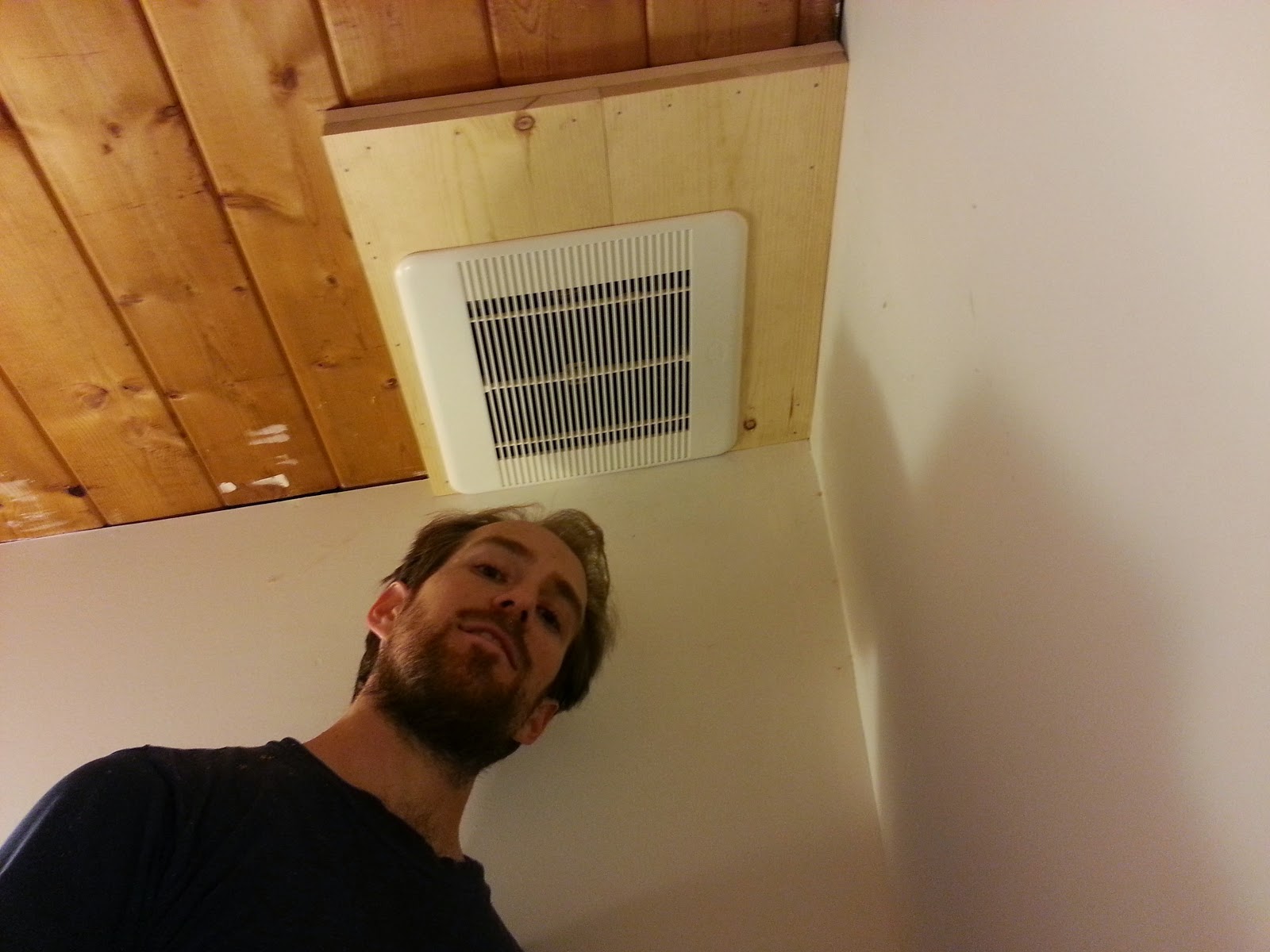 A lot of the work this weekend was done in the ceiling fan dept. which meant fighting gravity all day. I found this very difficult when I had to hold things in place, but Brendan has impressive man strength and never complained once. Look at the pretty box he made for the ceiling fan! The box is so big because there is a hole in the ceiling on the other side of the room, so Brendan just harvested the boards which were in the ceiling fan's way for the other corner and replaced the opening with a box. He even got to wear his eye shield Christmas present for this task to keep all the falling saw dust out of his eyes. 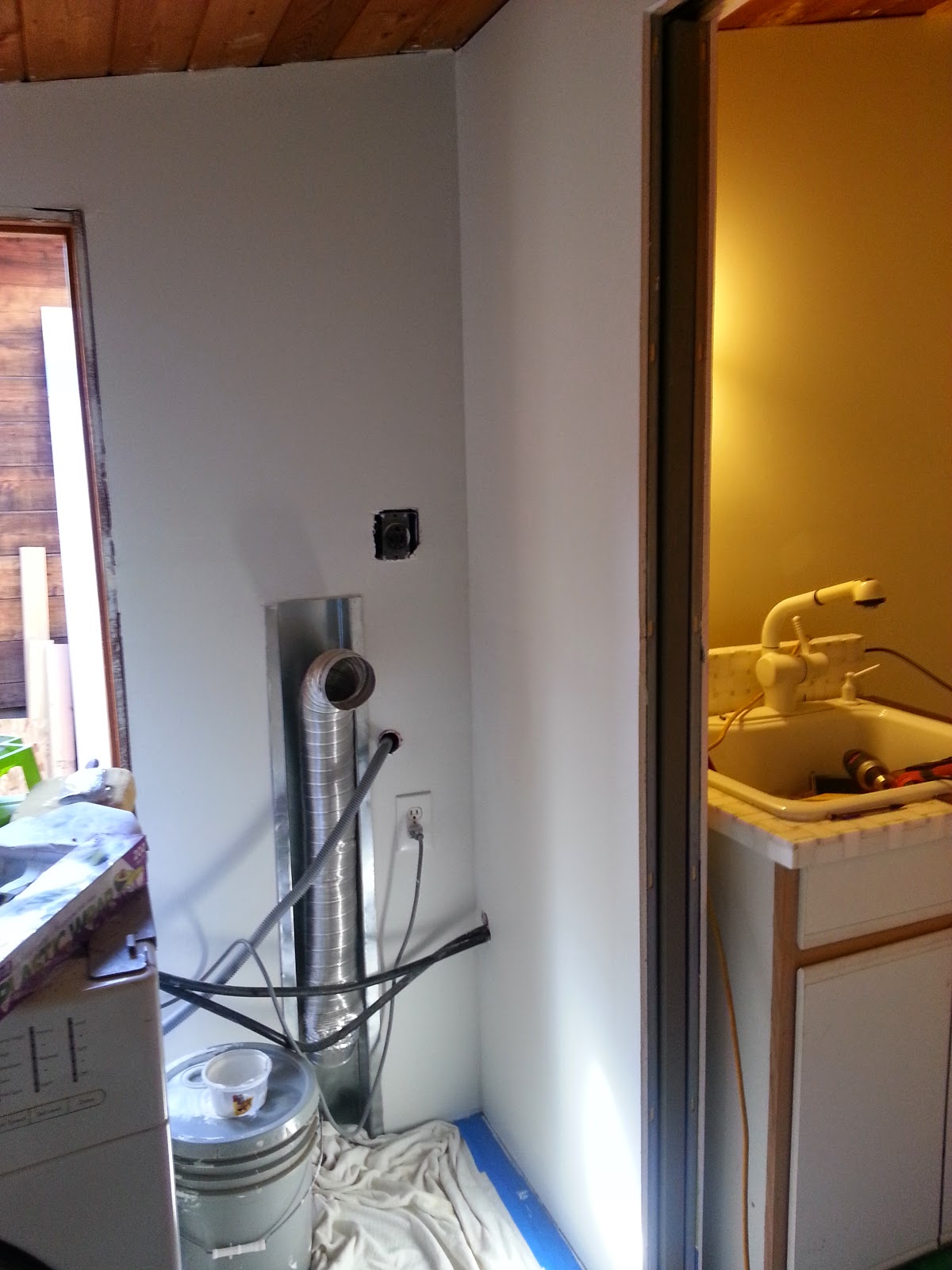 One of the tasks I worked on this weekend was sanding, mudding and re-sanding the new walls, and then painting them. The corners proved to be much trickier than we anticipated, and I am by no means a pro wall creator, but most the corners will be covered with appliances anyway, so it's all good! I have been itching to paint and install trim for a while now, so this step felt pretty satisfying. This picture is of the pocket door into the small bathroom on the right, with the washer/dryer hook up on the left. It's going to be a tight fit!
Lastly, here are a few pics of our epic tile job from last weekend. Brendan and I both agreed that cutting and installing the tile and grout was by far our favorite step so far. We practically want to quit our jobs and become tile people. Seriously. 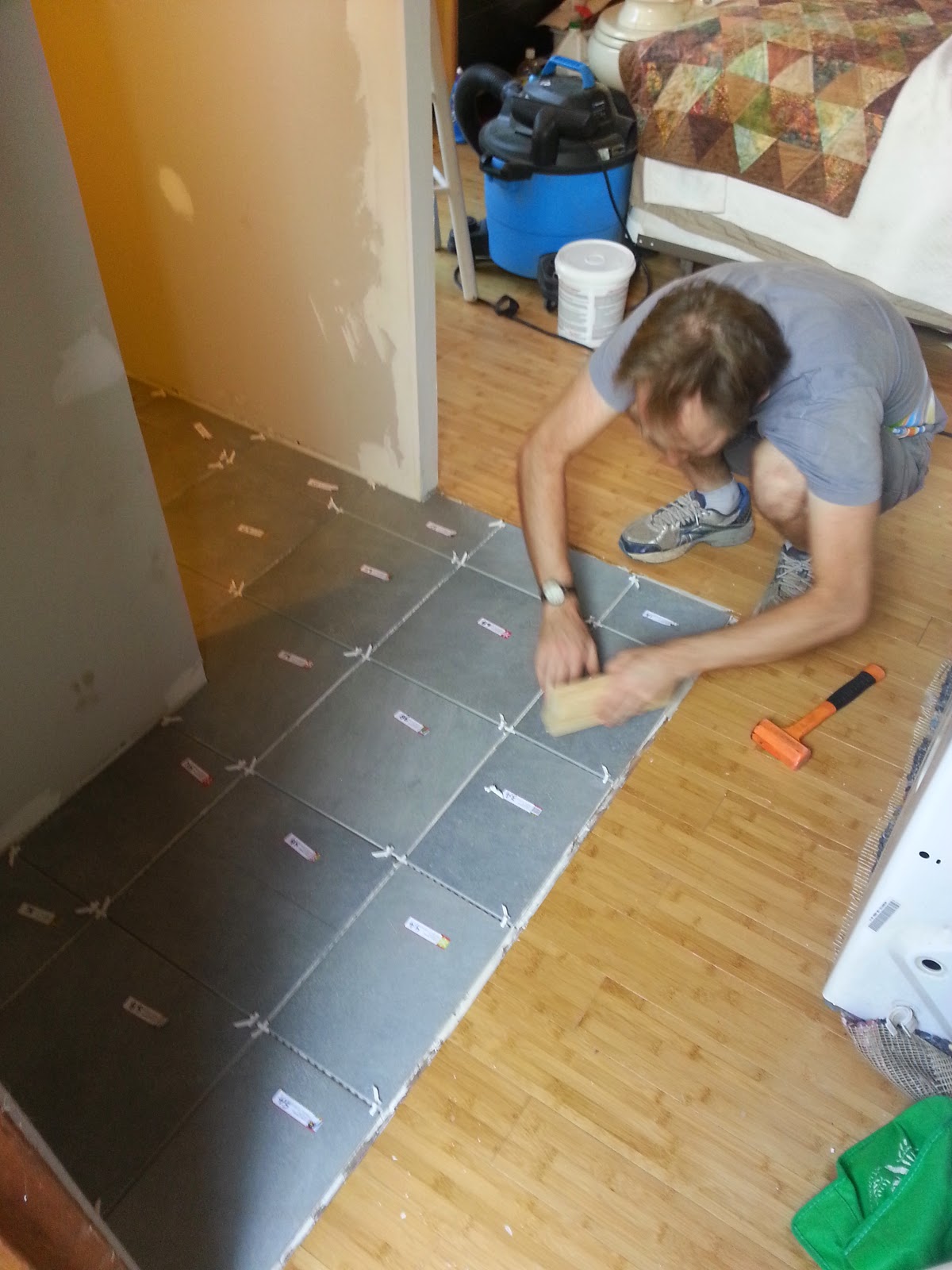 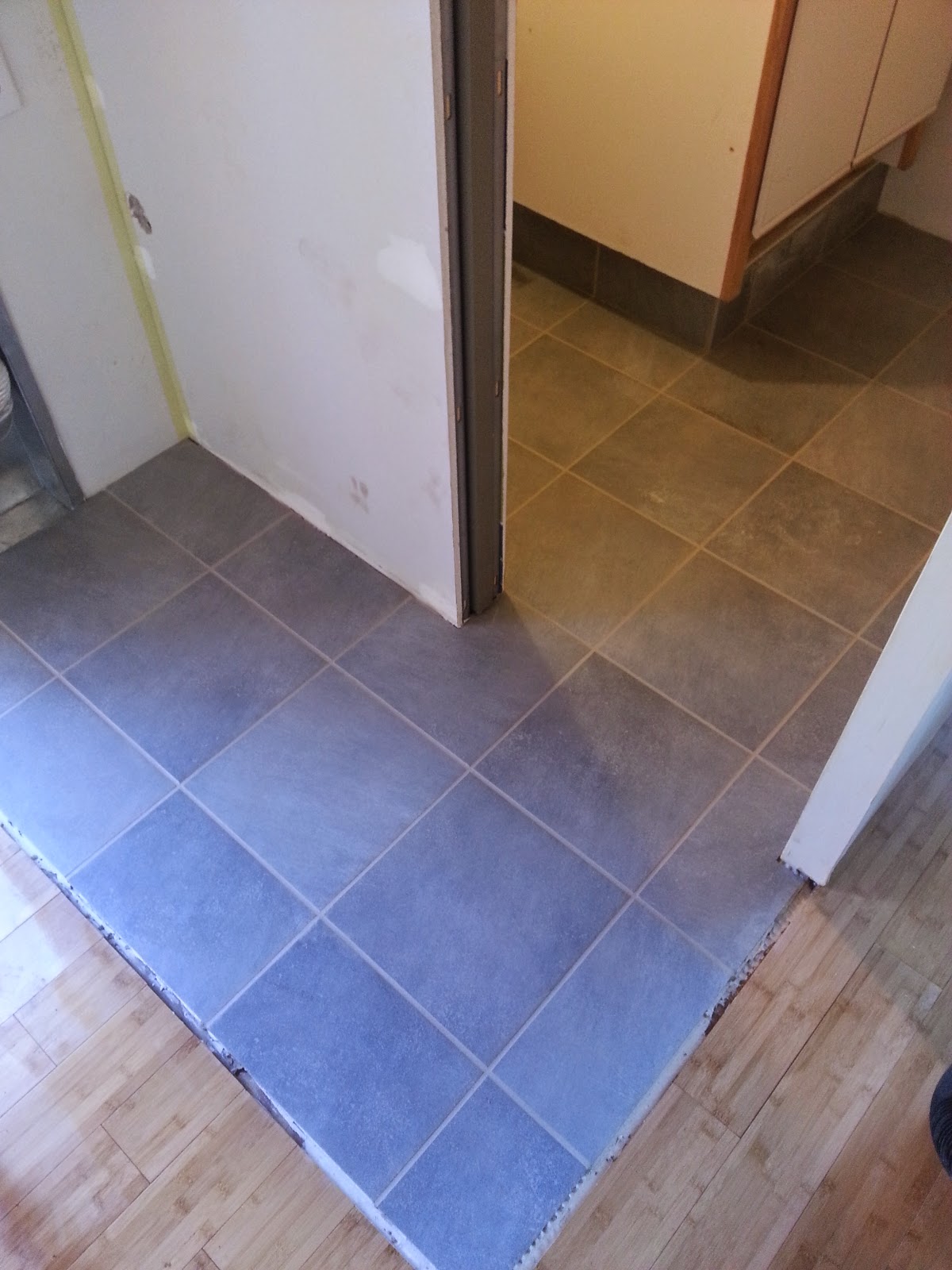 Brendan cut the tiles while I rode bikes last weekend. None of the corners in our house are square so we had to label them before pulling the tiles up to put down the mortar in order to ensure they went back in the right orientation. Then we laid the tiles, spaced them and waited patiently to grout the tiles.  During the week we sealed the grout, and now all we need is T molding for the transition from bamboo to tile.

Our to do list is still pretty long, and includes:
Hook up water to toilet
Install T molding
trim and baseboards
frame the window in the room
door jams and frame pocket door
rewire a light switch that the electrician put in wrong
put the deck back together
build a trap door for accessing the compost drum

It's a long list still, but I think a lot of the remaining items sound fun! Can't wait for trim and baseboards!

We should be able to use the toilet within the next week. Want to help break it in? Jk!! There is a long list of neighbors who have already expressed interest, get in line.
Posted by Ms Lariss at 8:19 PM