Well, I guess I need to make those mistakes more than once to learn all those lessons, because this past Saturday, there I was, in the Santa Ana Mountains, 3 hours into our ride having consumed almost no water and absolutely no food, with a solid 3 hours of riding ahead of me. I was hurting. I wasn't enjoying the climb up Trabuco trail. But I want to go back to the beginning.

When Carl and I met at the San Juan trail head at 7:30 I realized my rear thru axle wasn't in the car, and had to book it back towards home to grab it. When I started climbing San Juan trail, 30 minutes behind Carl, I was riding at a pretty quick pace, partly to catch up and partly because I wanted the QOM (queen of the mountain) for the trail really badly. I rode moderately hard the whole way up and made it to Cocktail rock in 50 minutes. I thought this was a decent effort, but Carl told me I was slow as crap and that def some other girl had posted a faster time. I was sad/frustrated, so I did the only thing I could think of, punish myself for not being faster by continuing to ride fast. We hit the trail head for Bell Ridge in just under 2 hours, and dropped in without so much as a brief pause. The descent/hike-a-bike/descent down to Trabuco wash was a blur of dragging a foot and chasing Carl because he decided to NEVER stop (punishment for my earlier climbing pace perhaps). My riding was a mess because I was trying to go really fast, which just meant messing up, crashing into bushes and loosing my balance in ruts that are normally fun to surf down. When I hit Ding Dong trail, I decided I was over the QOM thing, and just tried to slow down and find some flow. It worked like a charm, I rode all but one switchback on the SUPER steep and techy trail, and hit the bottom in what is the second fastest overall (men and women) time for the entire Bell Ridge plus Ding Dong time. Beautiful.
I was in really bad shape as we started climbing again though. This was about 3 hours in, I had drank half a bottle and eaten nothing. I pulled a banana out of my pack and drank the rest of the bottle. We kept climbing. I sucked down most my Camelbak on the way up the wash, and bummed a water bottle off a random hiker on Trabuco trail. Halfway up Trabuco Carl and I were both out of water. I still hadn't eaten more than a banana. I felt horrible. Head hurt, body was tired, didn't want to go up hill. The only thing that kept me moving was knowing Brendan was up the trail ahead of us and he had a PB&J for me. I tried to motivate myself by thinking about the sandwich.

We ran into Brendan 15 minutes from the top of Trabuco, and pushed, all three of us thinking about the water at the top. When we got to the top of the wall though, a quick search in the bushes turned up no jugs of water, like I had expected. This hit my will like a bus. I was done mentally and physically. I wanted to ride down the wall and then down San Juan to the car.

Carl wouldn't give up so quickly though. He kept running around, searching every bush until he hit gold! A huge, old jug of water and a brand new gallon jug! We all drank greedily, ate sandwiches and drank some more. I started to feel better, and so did Brendan and Carl. 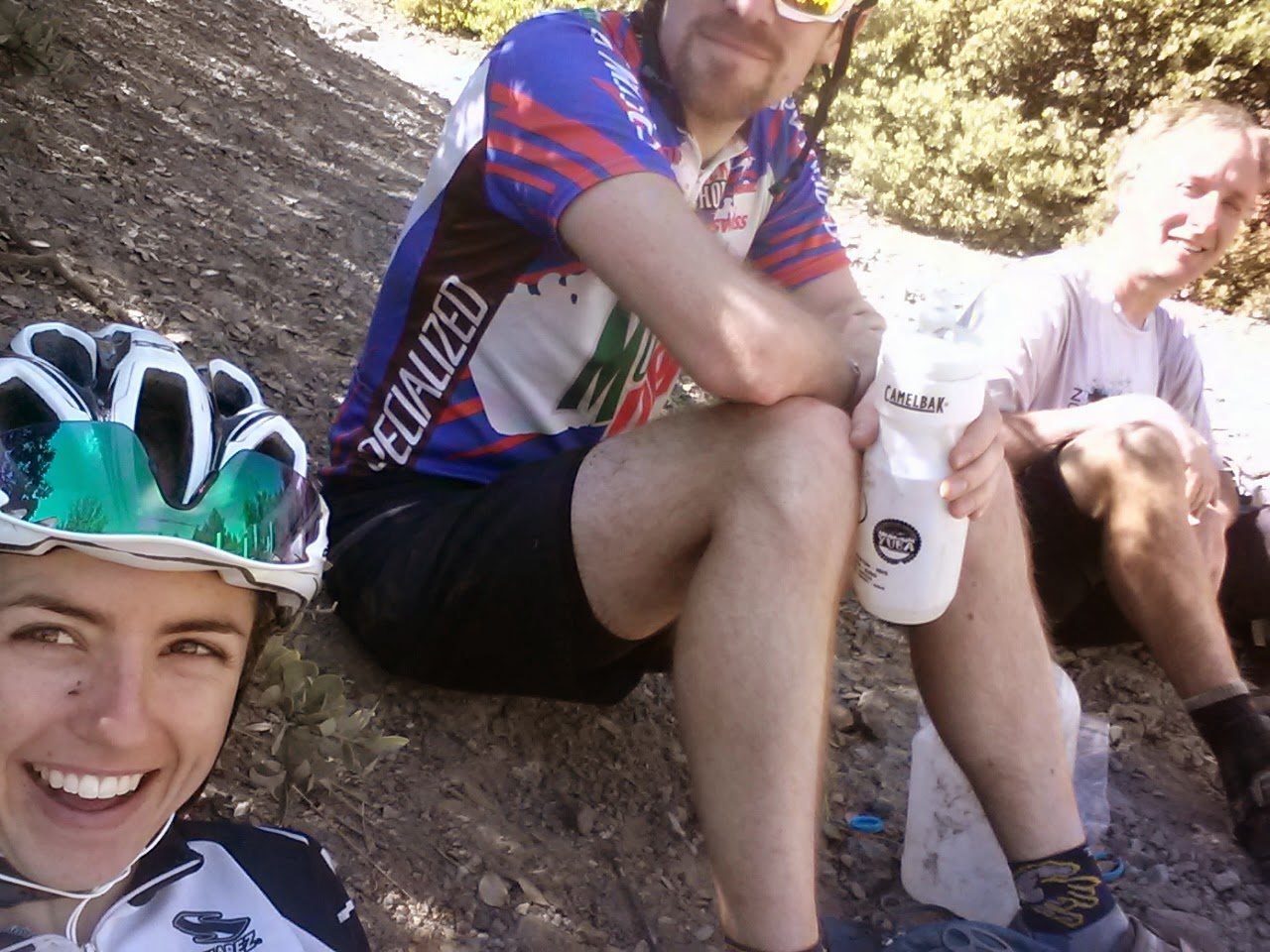 The three of us post no-water meltdown, feeling much happier.

We decided to push on towards Pinos trail. Brendan had never ridden Pinos, but despite warnings from me the night before of all 13 hike-a-bikes and the loose skree filled ruts running down every descent, he was still game to try it out. Sadly, Brendan crashed on the first descent, jammed his thumb and scraped a bunch of skin off his leg. This was bad news bears because we had a lot of technical descending and climbing to do. The rest of the ride was a blur of euphoria for me, and pain for Brendan. I experienced Pinos like I have never ridden it before thanks to all the descending skill I have picked up from the Rad's. I rode sections of trail I used to hate, and loved every second of it. The skree didn't feel scary, the ruts were ride-able and the steep rocky stuff, no problem. It was incredible. When we got to the very end, where big, chunky rocks are all over, and in switchbacks, I rode over stuff I used to think was impossible. It was an almost magical feeling. Brendan was just stoked to be done, and insisted he didn't enjoy any of the descent. Bah! 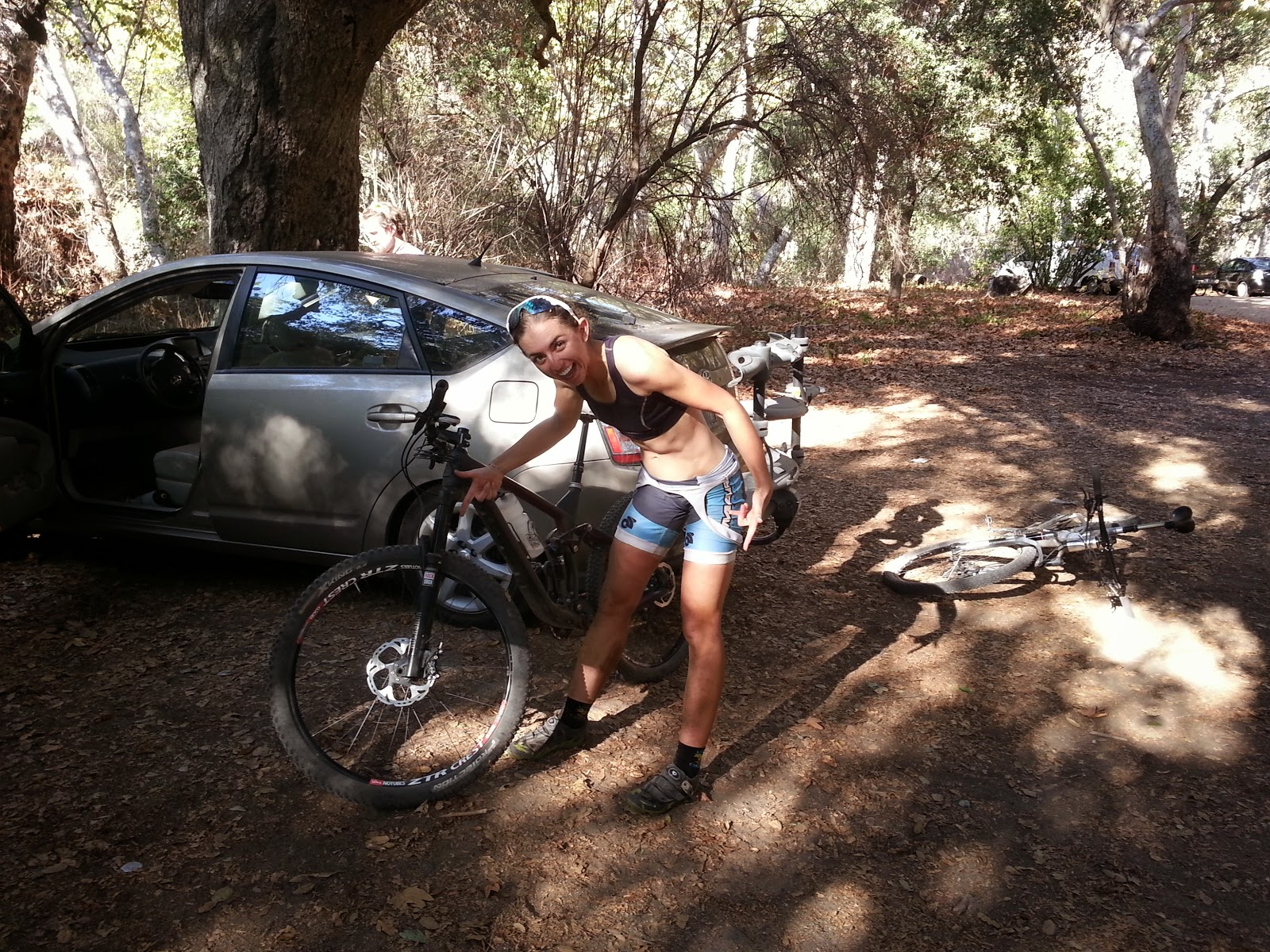 I was stoked at the end to have spent another 6 hours in the mountains, riding on razor blade rocks, with NO FLAT tires, thanks to Stan's No Tubes :)

Absoulte highlight of the day, even better than actually getting the San Juan QOM, and second overall on Bell, was when Brendan said he was impressed I rode off this rock thing on Pinos.

And that is the almost as long as the actual ride, ride recap of the Lung Loop with lots of bad choices!