One of the things I love most about mountain bike racing is how accessible it is as a sport. In the past two years I have gone from your regular mountain bike racer, who had pretty average goals about finishing/winning expert level races to a World Cup XCO competitor. It's the feeling of putting yourself out there, stepping up to the starting line of the next level of competition that I love. Last year, starting my first XCT race gave me that feeling, a mix of extreme nervousness and accomplishment of getting to start a race with the best women in the US. This past weekend the XCO (world cup cross country) was my first step into the top level of mountain bike racing in the world, and it was again terrifying and extremely exciting. I was lining up against the very best in the world, women I have watched and idolized for the past few years, women who are incredibly talented and strong. Although I was among the lowest ranked riders, starting in the very last line of call ups, I was pretty stoked to just be there! 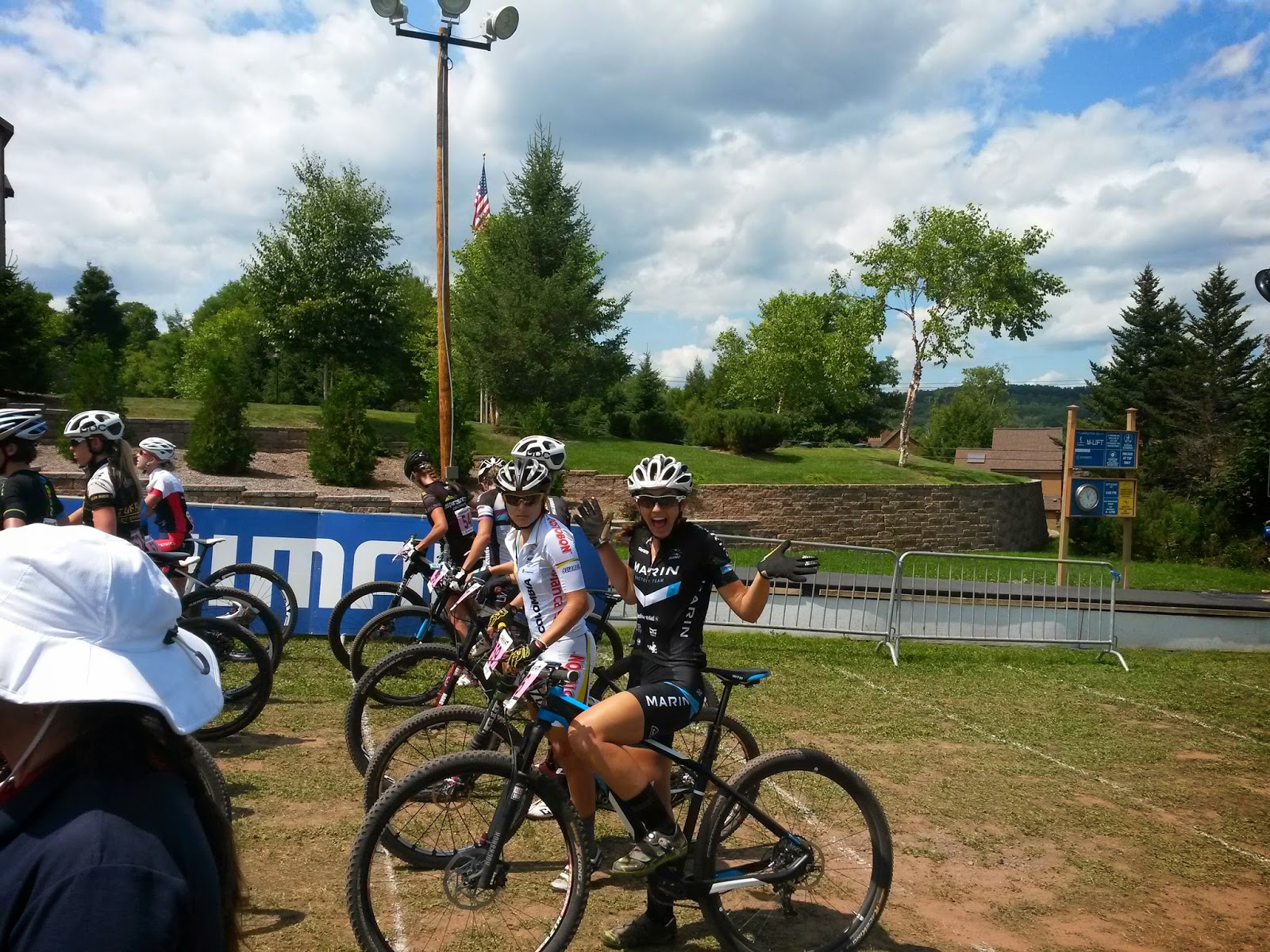 That 'holy cow, I'm racing a world cup' moment at the start.

The race started out like any other cross country race, except there were about 60 women in the field, 20 more than the biggest race I had done previously. Somehow I moved from very last line, to about 45th position going into the climb on the first lap, and the legs felt good, so I started picking girls off as we climbed the ski resort style ascent. When we got to the downhill sections I would follow the wheel in front of me as closely as possible, and was surprised to realize that I wasn't getting dropped. Descending used to be my weak point, but loads of work this summer at getting faster have apparently paid off. at the end of lap two I was in 28th position, and still feeling good. I tried to chase down a group of three on the climb of the third lap, but made no progress, and by lap 4 I was starting to feel a little tired. 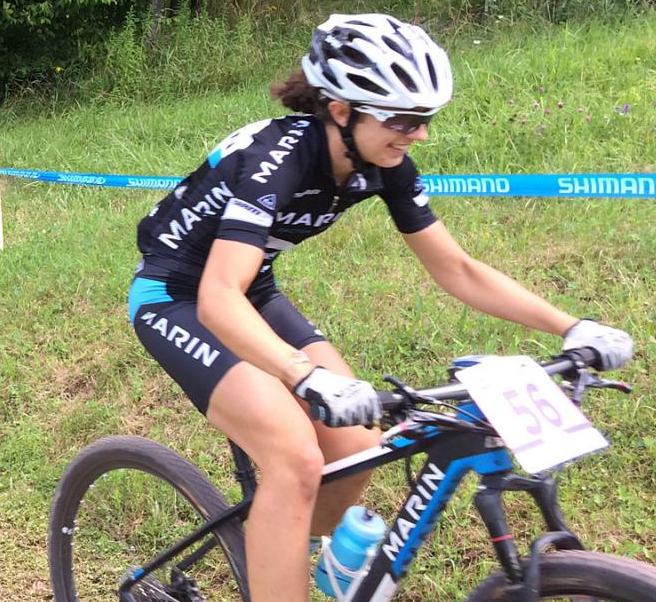 The best part of the race was having Brendan's parents cheering for me on the climb, as well as all the other amazing spectators. On a steep uphill section one group of hecklers had a chainsaw, loudspeaker with police siren, and tons of air horns. It was deafening in that little foresty part of the course and super motivating, I looked forward to it each lap! There was also a cute little dude who ran alongside me on the fire road for a good distance yelling with a thick accent that I could rest tomorrow, and to go faster. At some point my face hurt from smiling so big, but it was like living a dream, being out there riding my legs off. On the last two laps I got passed twice, and didn't have the legs to respond. It was still exciting to finish all 5 laps without being pulled, and 30th place was a better result than I had expected. I crossed the line smiling ear to ear, but within an hour or so I was already beginning to itch to do it over again. I love how racing puts the fire in my belly to train harder, and to chase a better result, to push myself to improve.

Brendan didn't get many pictures of the race because he was doing such an excellent job in the feed zone, but if you want to watch the race it is still online here. As we were eating dinner on Sunday night I got a few text messages from friends saying I was on their TV, which was like a cherry on top of the race experience :) Thanks for watching/cheering friends and family! Your support is super encouraging!

Some folks at the race went the extra mile to help me out this week, and I am crazy grateful for their support. SRAM MTB threw a new bottom bracket on my bike on Friday because the old one was clicking, and then they helped me install new brake pads Sunday morning an hour or so before the race. Those guys not only make the best 1 by 11 drive train on the planet, they are also beyond helpful! Stan's No Tubes also helped me out a lot this weekend, installing my spare tire when I tore a hole in my sidewall pre-riding on Sat. Then Richie cheered like crazy for me during the race. 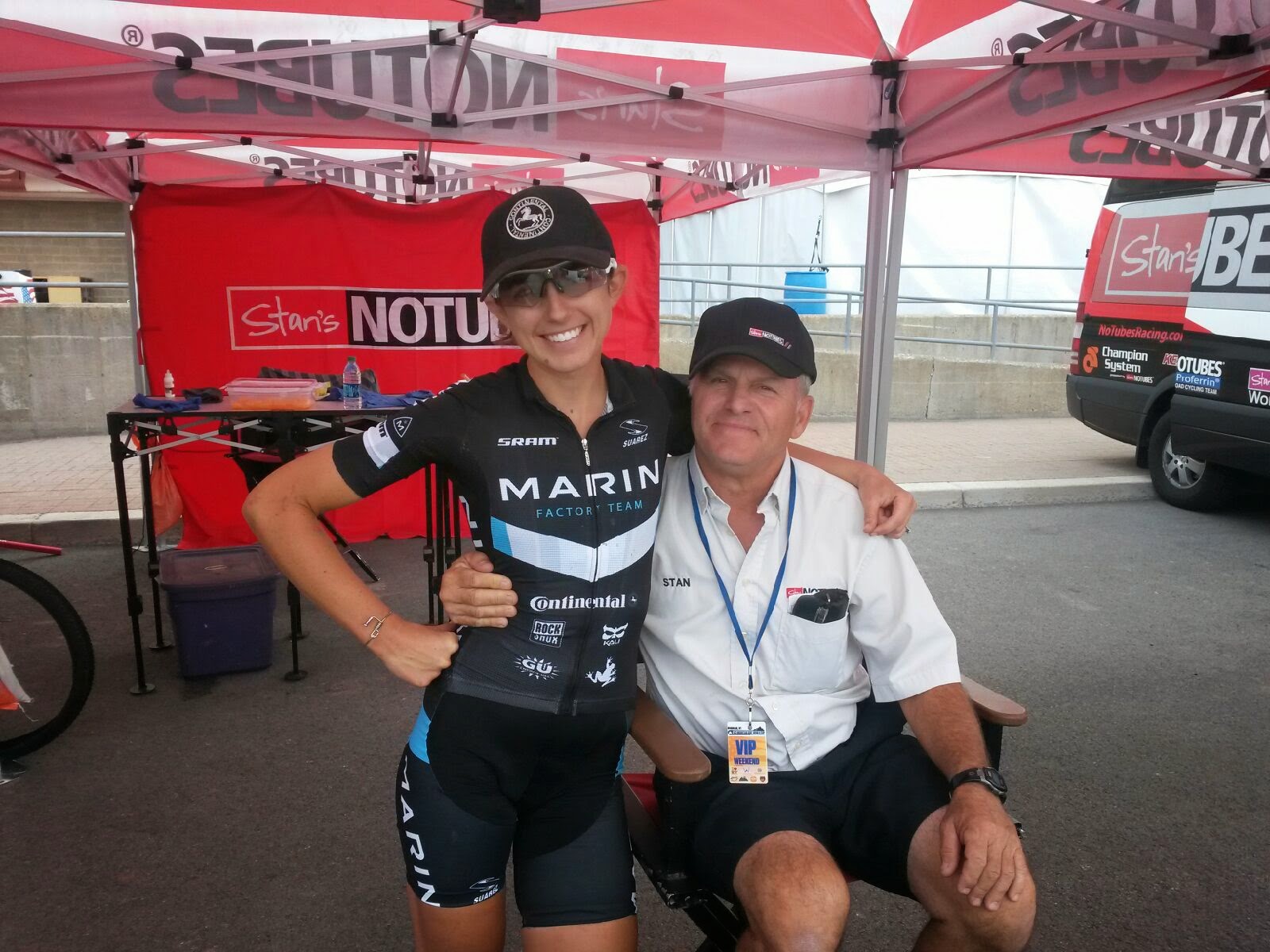 I even got to meet Stan himself, which was pretty darn exciting! Thanks guys for being there, keeping my bike running smoothly and believing in me!!!

I can't wait till my next world cup XCO, hopefully early next year!