FINALLY the long, race void month of May is OVER and we are back in the mountain bike race game! I have to say I did kinda love May though. All that training, sleeping in on the weekends, and no driving became some of my favorite things in May. But what I love more than all the things is racing my bike!

This weekend gave me two chances to race bikes, a chance to ride with hubs, and the chance to be camp leader of our campsite! (don't ask Brendan who was camp leader, he says my leaving a stake in the ground when packing the tent means my leaderdom is revoked. Whatever).

The first race took place on Saturday afternoon. We arrived at Snow Summit in Big Bear at 1pm, hustled to get kitted up, grabbed some lift tickets and hit the lift to pre-ride the super D together (out of love). 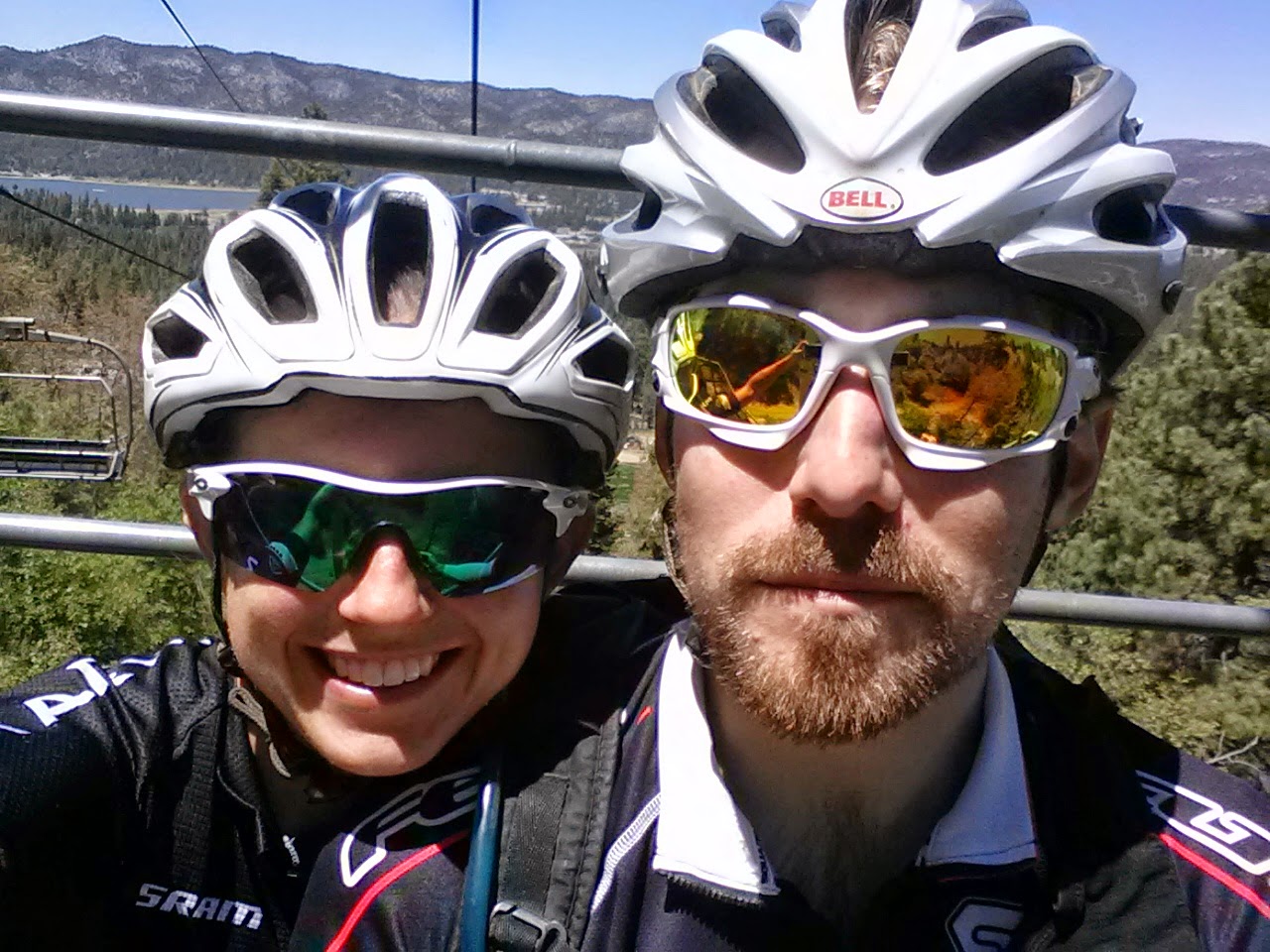 Brendan was really happy, I swear. Maybe he is trying out a new, serious photo look!

The Super D course was mostly the same as last year, a fun, long run down some xc-ish dh trails, with the addition of a new trail that was cut just a week or so ago. As you can imagine, this meant VERY loose, dry conditions, and I got to surf it out in the deep, dusty ruts once in my pre-ride and twice in the race. We did a two run format race, with combined time counting towards the win. As the only pro female, I had to work super hard to beat myself, but no worries, I came out victorious! Despite nearly being killed by a car on the second run (it pulled into a parking lot right in front of me as course marshalls looked on) I had a great time, and left the race with that sexy dust/altitude cough. 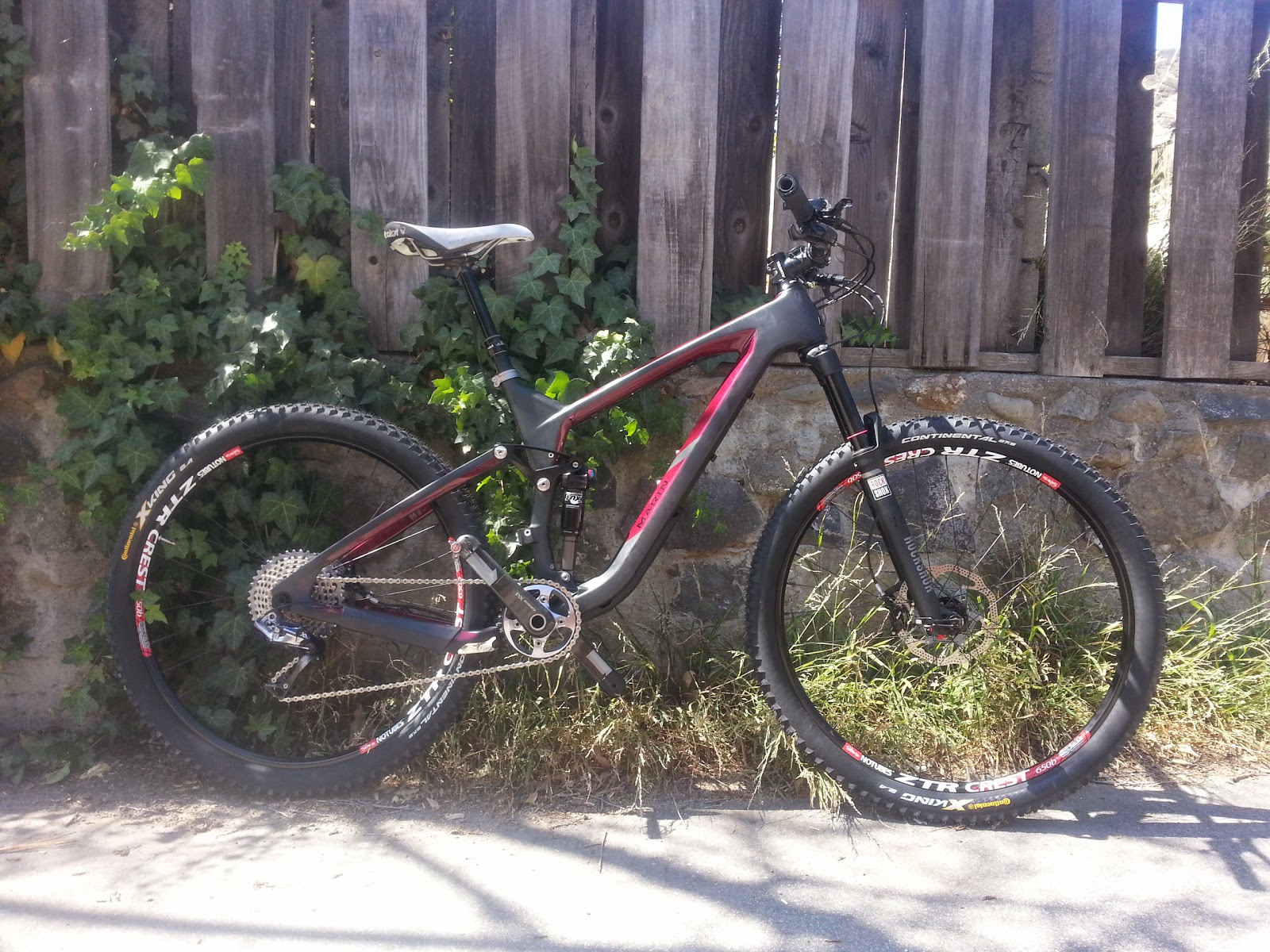 Maybe the most notable aspect of the Super D race was the stealth beast between my legs. I have no action shots to prove it, but Brendan finished building up this hot mama literally minutes before we left Silverado (stolen seat post and all). The race was a plush, dreamy cloud of carving trail and lofting rocks and roots on my new Mt Vision. We are still getting to know each other, but I think I'm falling for her (don't tell Harriet).
Saturday morning, after a long, cold night of not sleeping, we grabbed some caffeine, and headed back to Snow Summit for more racing fun. First, and most importantly, I relaxed in the back of the Prius while Brendan wrenched on my bike :) I have the best boy, have I mentioned that? 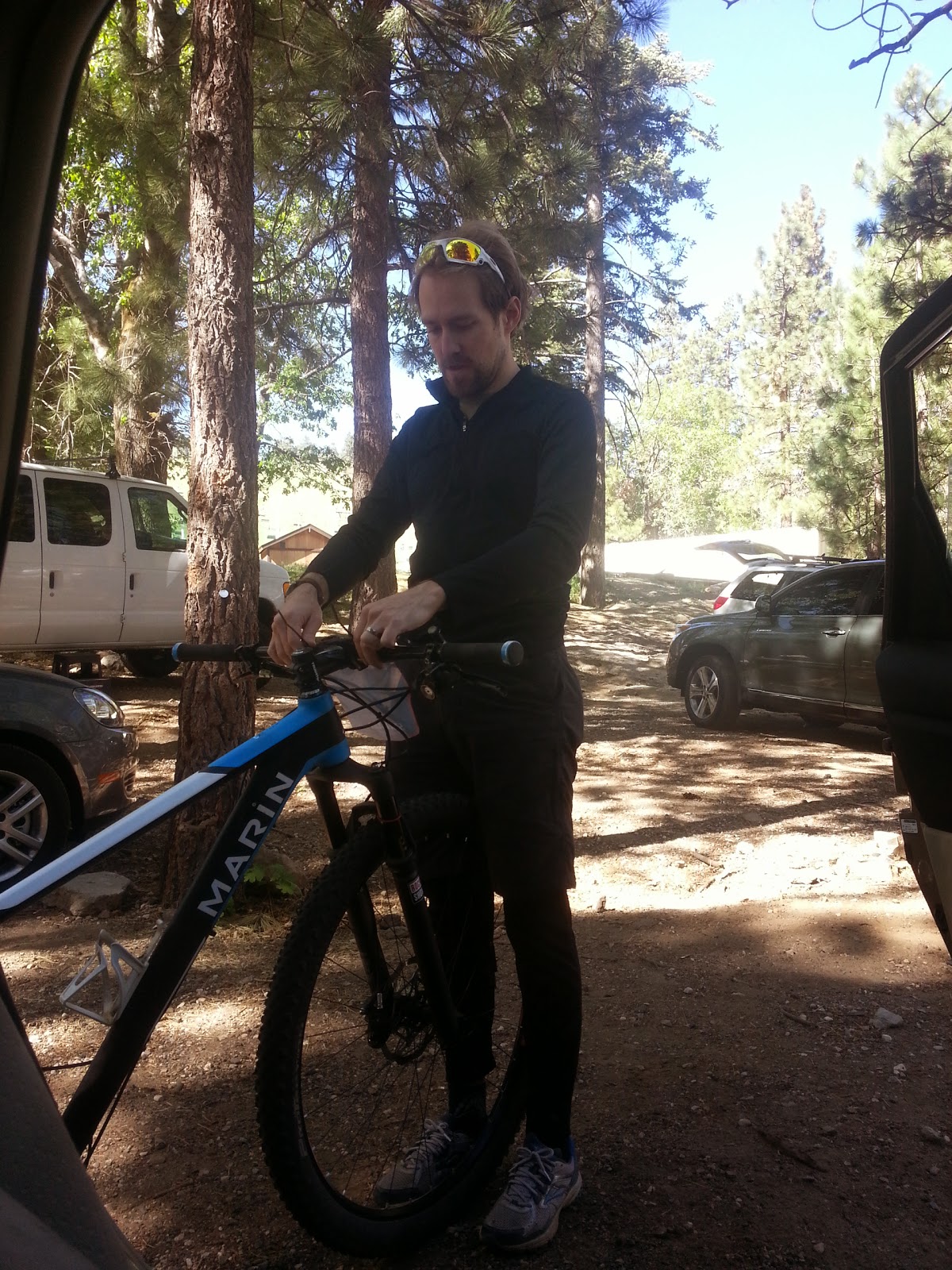 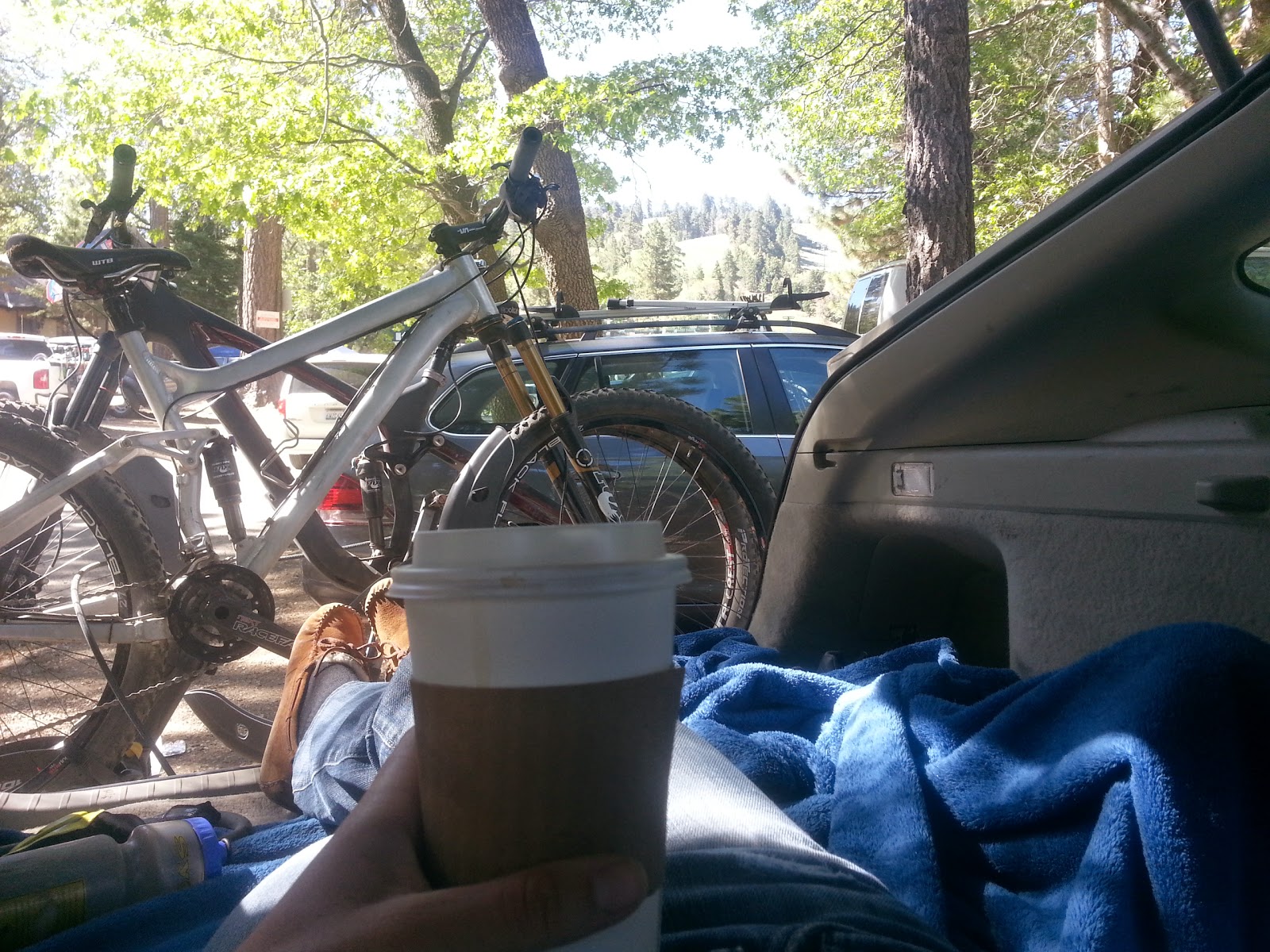 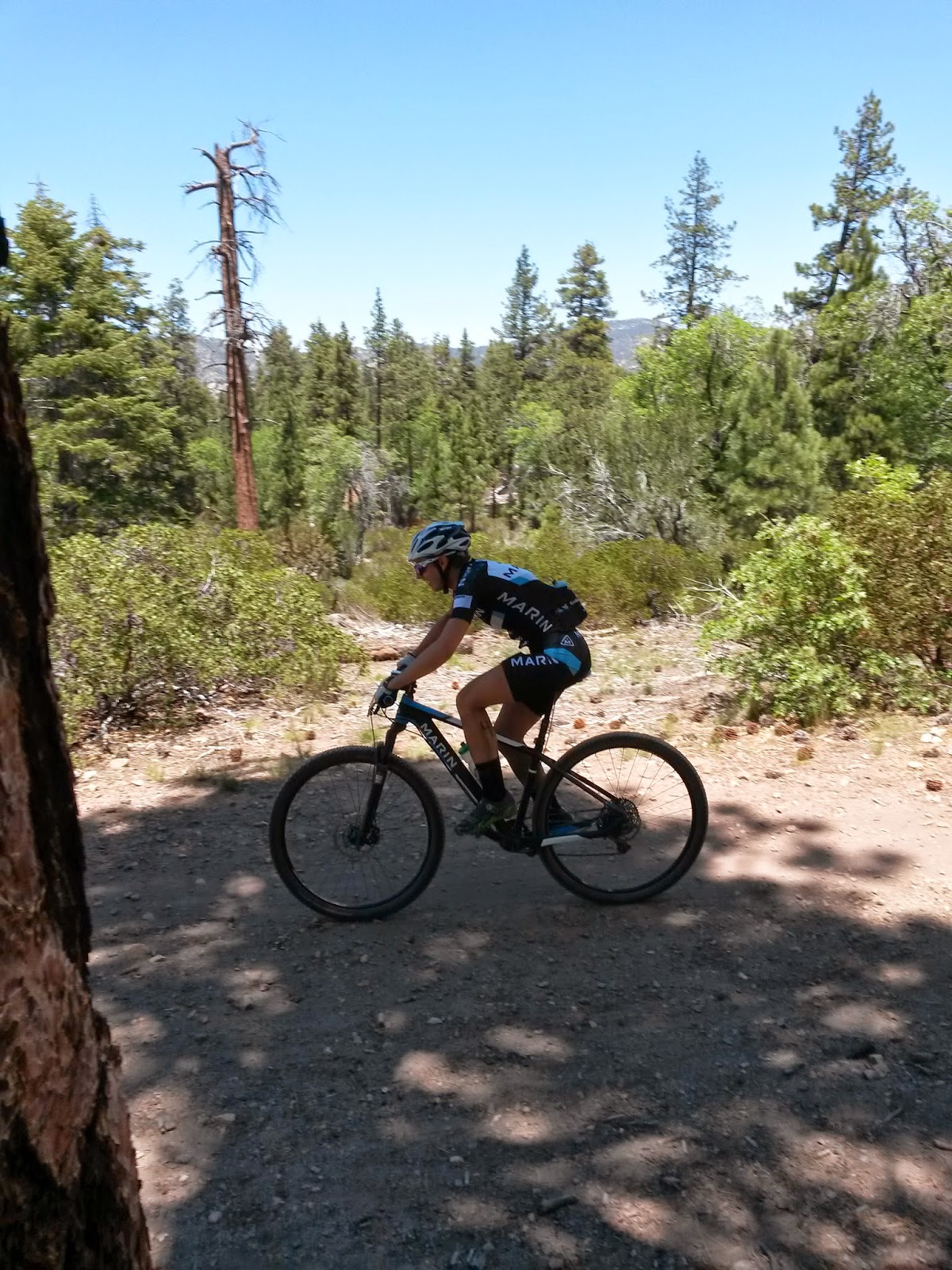 Then the gnar shredding continued with a 25ish mile xc race of epic painfulness. This is how the xc race played out. Larissa starts WAY too hard, but doesn't realize her lower than normal power numbers are from altitude, so she tries to go harder. Larissa blows up after first climb and rides in a haze of agony, on fire road for what seems like FOREVER! Larissa gets passed by a few pro men who she was beating, decides this is unacceptable, goes really hard to try to drop them. Larissa finds herself cracked again on Skyline trail (FINALLY SINGLE TRACK) but is too tired to ride some of the techy climbing obstacles. Larissa runs into TONS of beginner, sport and little kid racers on single track and decides to cheer them on ranther than being too agro about passing. And finally, Larissa has a blast descending to the finish behind some of the rippingest little kids around.
All in all, I would say it was an awesome race where I drank not nearly enough, ate nothing at all, and somehow still managed to finish with a smile. It may have been those rad kids killing it at the end that got me through. Good work little racers! 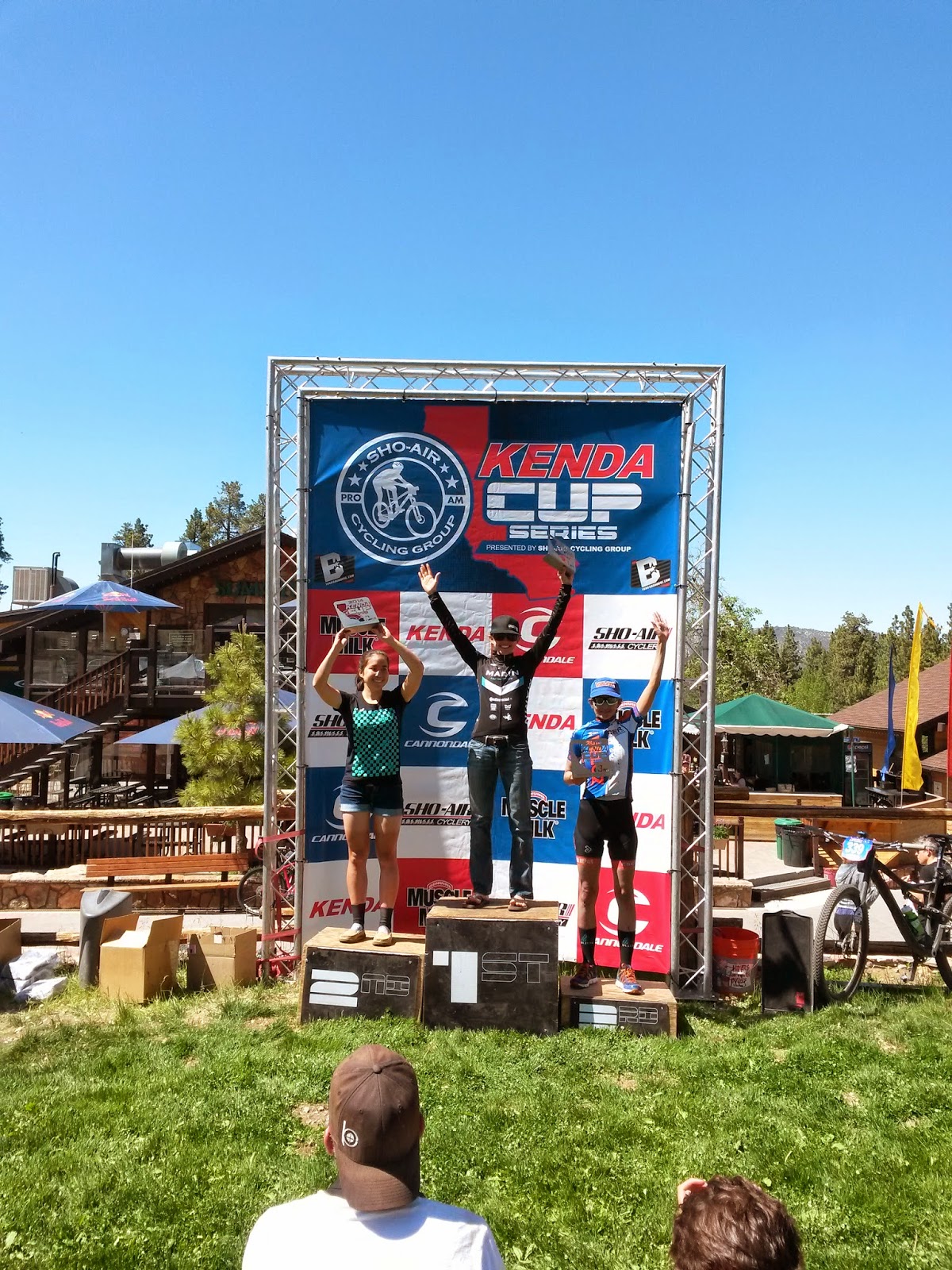 Although I didn't feel fast like a rockstar, my #CTSathlete coach must be doing something right, because I did earn top step.

And there you have it, the first race back from a 3 week hiatus! I couldn't get it done without the support of a few good industry people, so thanks Marin Bikes for trusting I will shred on your machines, Continental tires for keeping me hooked up in loose, dry conditions (I appreciated not loosing traction this weekend!), #Kaliprotectives for keeping my noggin' safe, #Guenergylabs for keeping me hydrated despite myself, #sramMTB for making the best 1 by drive train ever, and Suarez Ropa for the killer kit.