This round of the US Cup Pro XC Tour was in my back yard (basically), so I was pumped to sleep in my own bed, not travel (too much), and race in our typically hot SoCal conditions. Plus I had sexy mechanic Brendan on hand to go over my bike and feed me bottles during the race. 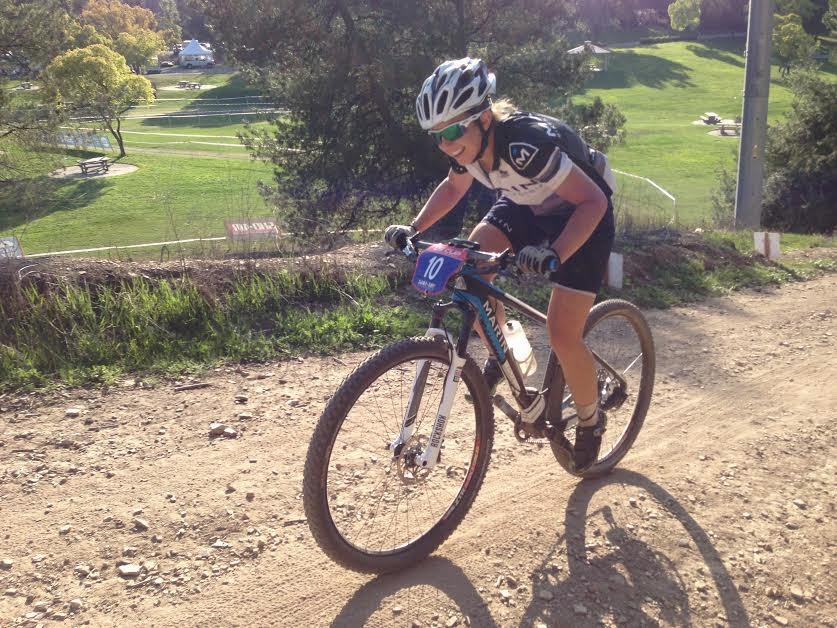 I tried to have fun, but it was a hard race!

It basically went down like this; get pushed around A LOT at the start, which was scary as I did not want to crash, end up dead last on the start lap, move up from 41st place to 20th place by first climb, dropper post breaks, stop to fix it, loose a bunch of places, work SO HARD to make them up that I cramp like mad on last lap, cross the line in 15th. Overall it was a great race, fun course and awesomely fast competition, but I can't help being hard on myself for making some bad decisions, like running a dropper post, and only drinking half a bottle the whole race. 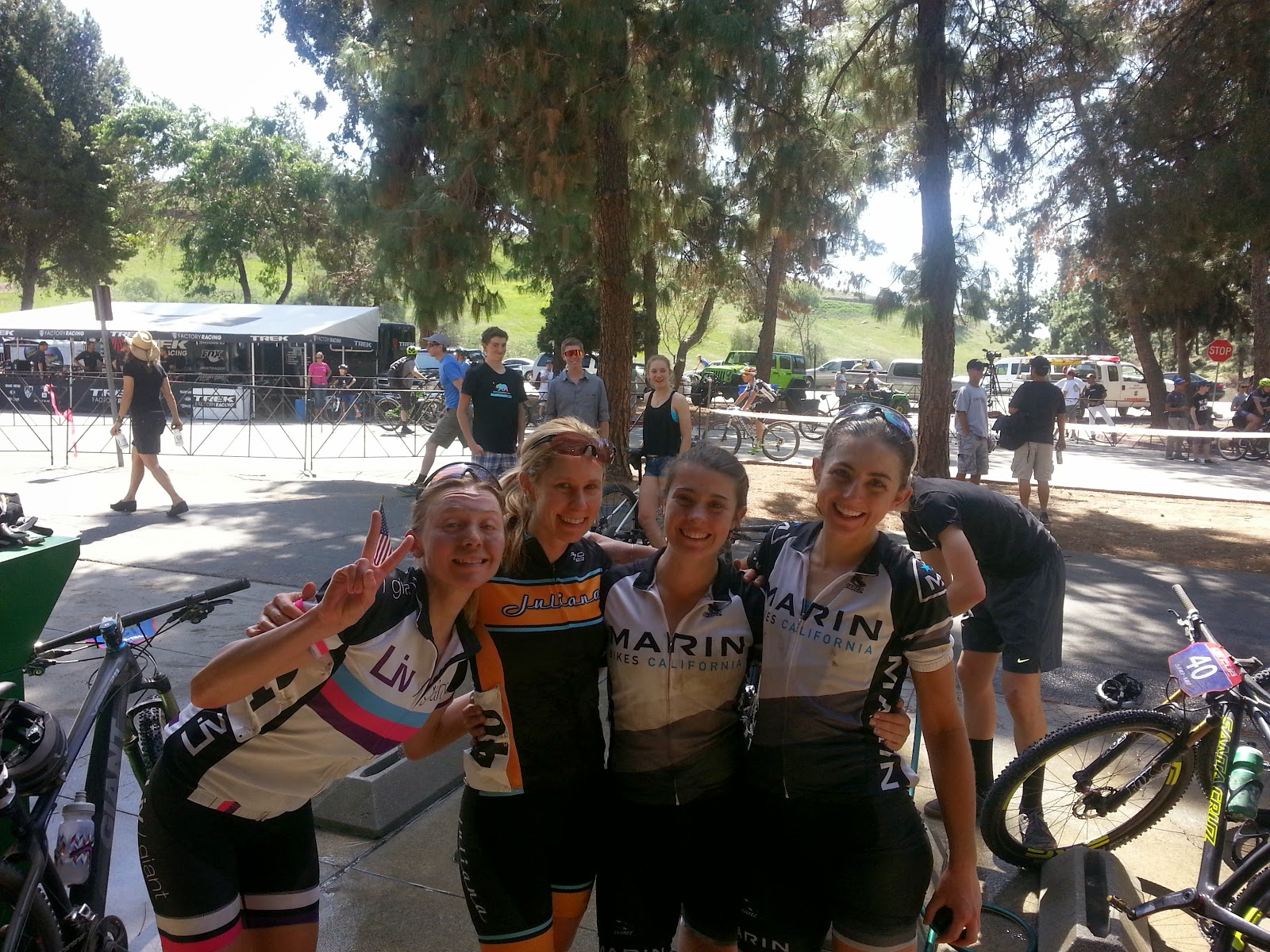 I got to spend some quality time with some awesome women, and my team mate, Cara!

Super D was also on Sat. I raced it for fun, but looking back I probably should have been resting rather than pre-riding and racing what was essentially a hill climb. I was pretty fun though, and I crossed the line drenched in sweat and totally out of breath from the 7ish min effort. Don't ask me how I finished though, I have no idea, haha! 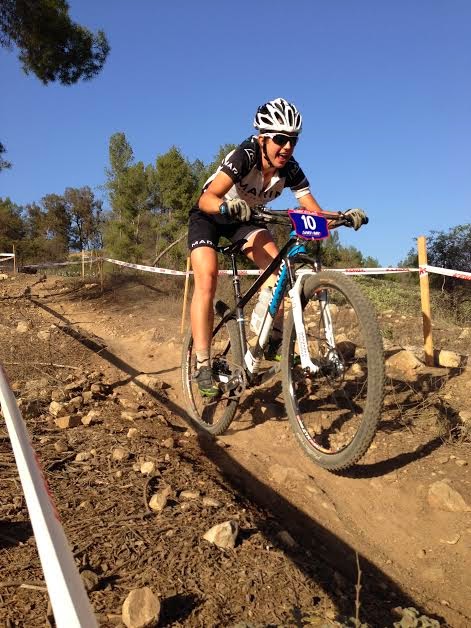 Getting rad on the Super D course. Who knew I had such wheel popping skill?

The highlight of the weekend for me was very unexpected though. I had the best race of the three in the short track on Sunday. This was a 15 minute, plus 2 lap sprint-ish race that basically ended up being a dirt crit. I had a less than ideal start in this race as well, but was able to fight back from the back to mid pack, and then dig in tooth and nail to move up to 9th by the finish. There were some monster pulls involved to bridge to the lead pack, and a wicked hard sprint finish to seal the deal. I think those torture intervals I've been doing every Wednesday paid off (thanks coach :) The cheering on this race kicked butt as well, I got heckled by many, many people I didn't recognize during the fog of the race. Thanks to all of you who were on the side of the course telling me that the Rads were right behind me! 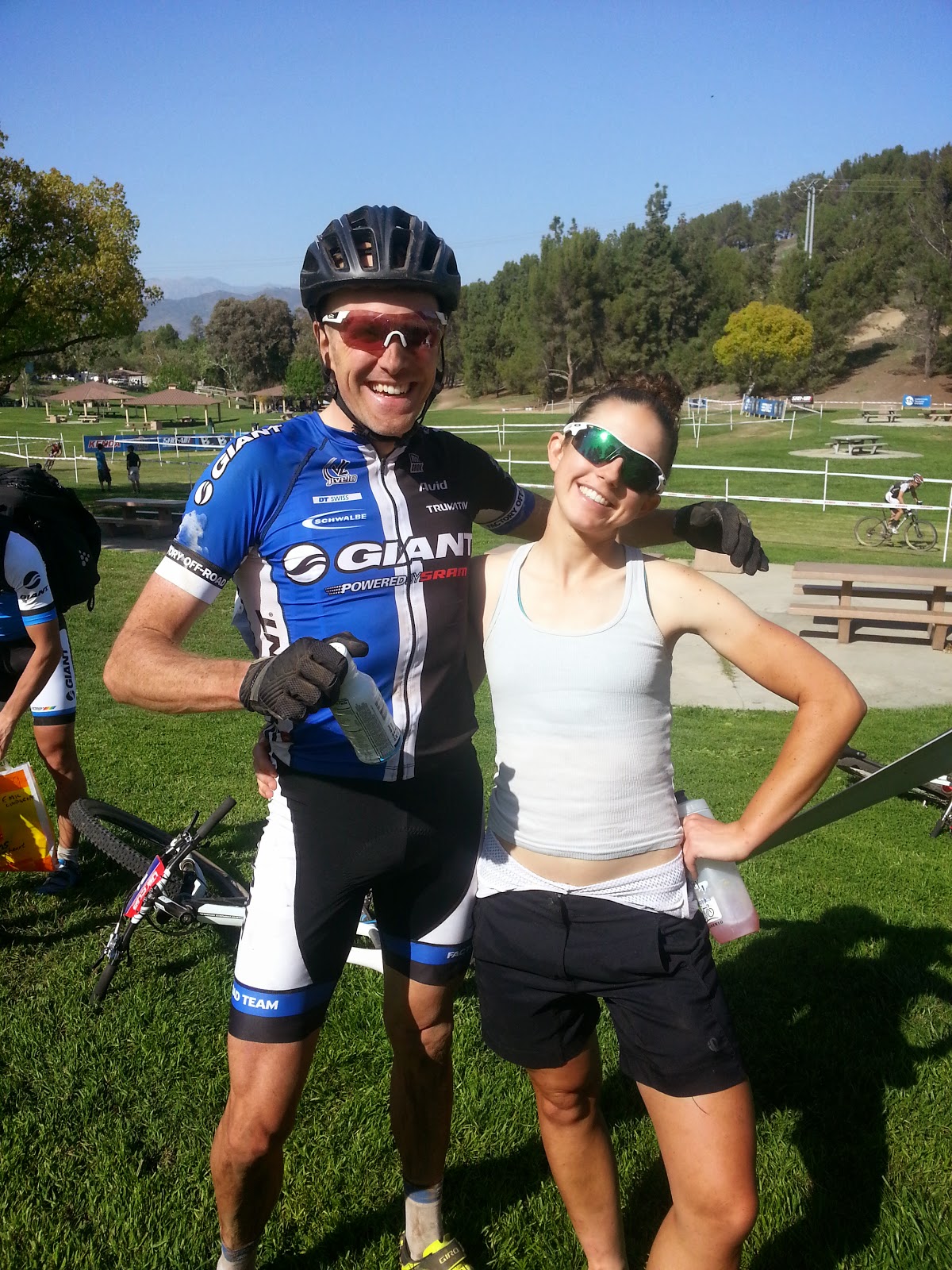 Another highlight of the weekend, one more picture with this guy! 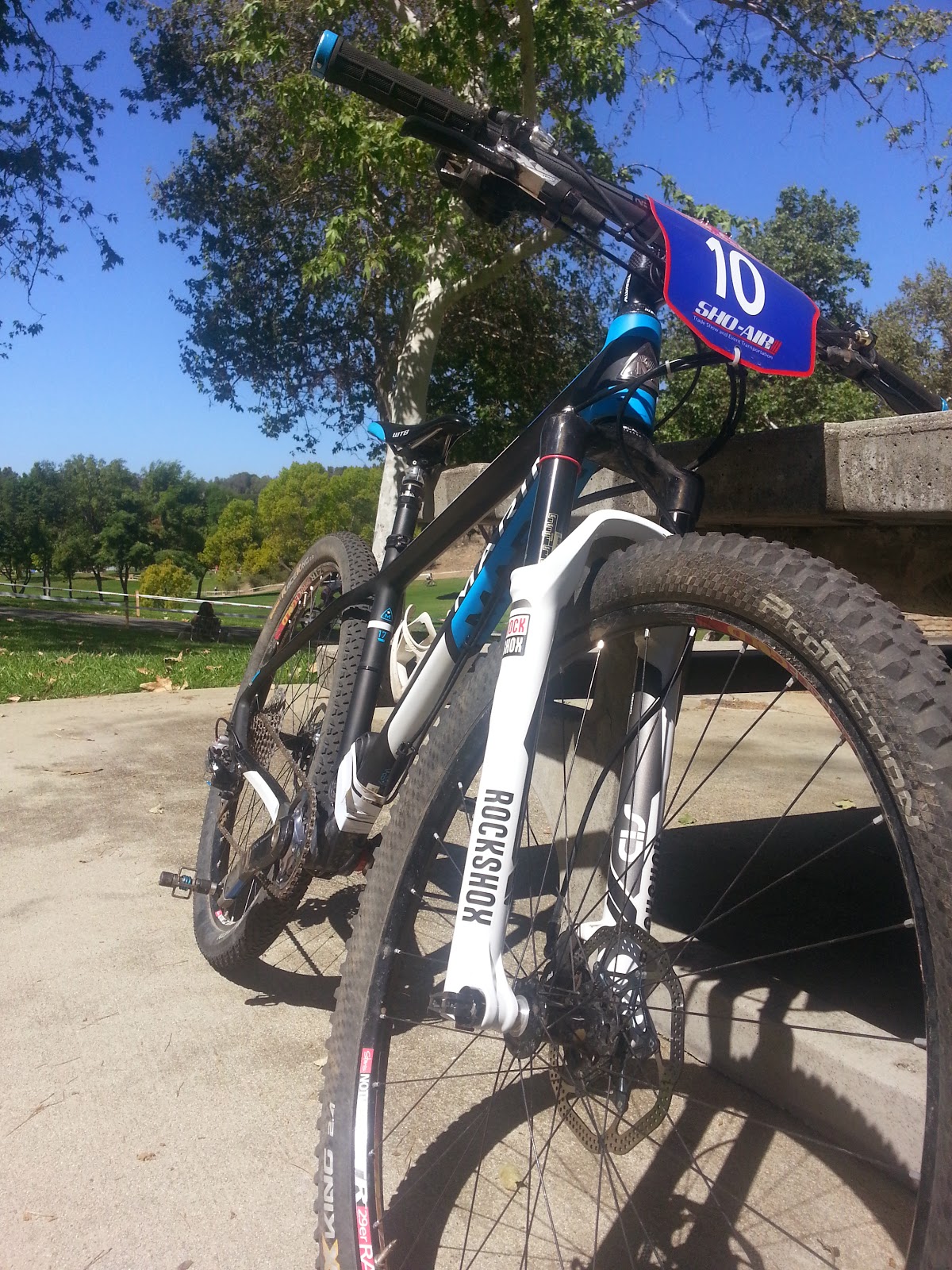 This bike was a stud and a half out on the loose steep "trails" in Bonelli. Thanks again to Marin Bikes for making such a killer hard tail. 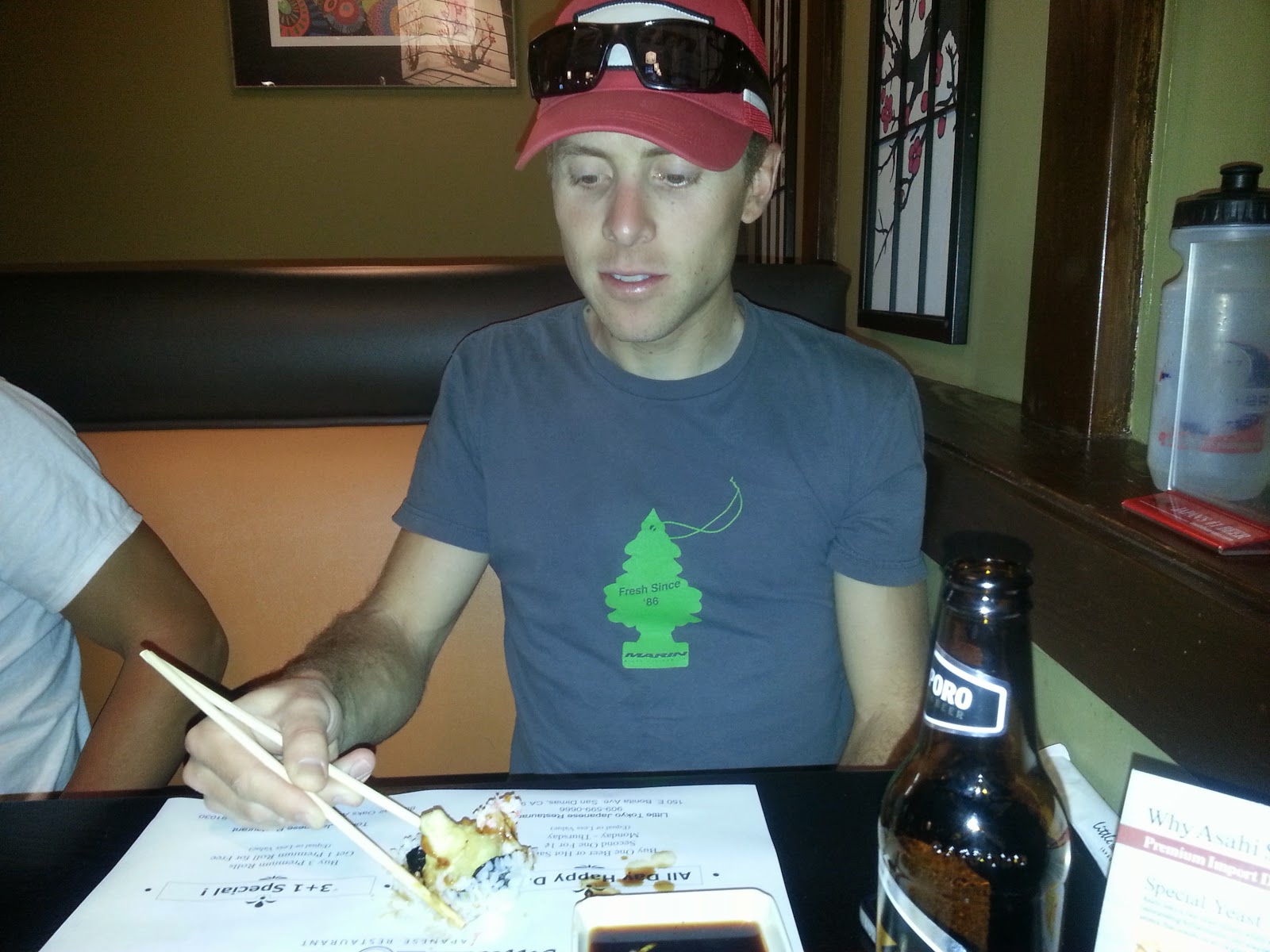 And we wrapped up the weekend by having sushi with no plates as a team!

Needless to say, I am addicted to mountain bike racing, so I am very stoked that this coming weekend is round 3 of the US Cup series, and again here in SoCal. You should come spectate, it's loads of fun!